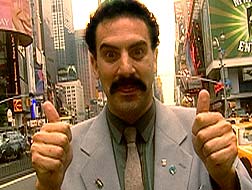 It has been several months since I’ve seen Da Ali G Show on Showcase. I wish they’d keep airing the episodes, even if they were repeats.

If you liked the show, you can temporarily slake your thirst for Borat by clicking his picture above. In this episode, Borat shows the people of Kazakhstan a small slice of American politics. Borat goes on the campaign trail with James Broadwater, who at the time, was trying to win the Republican nomination for Congress in his district. Queried about his various positions on issues, Broadwater made the implication that if you were not a Christian, you’d go to Hell (capital ‘H’ because that’s the way Broadwater woulda wanted it). I’ll let you guess his stance on abortion. After the interview aired, Broadwater issued a statement where he tried to salvage his image and blamed the “liberal, anti-God media”.

Surprisingly, despite saying all the seemingly right things to get you elected in the US these days, Broadwater did not win his district’s nomination.