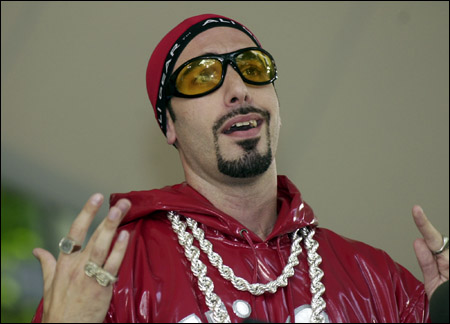 For part of Class Day festivities, Havard University brought in comedian Ali G to speak to the students. If you haven’t seen his show, I recommend you find him on either HBO or Showcase. It is quite entertaining.

Anyways, I like Harvard’s choices in their Class Day speakers. In the past they’ve had people like Will Ferrell and Conan O’Brien.

I managed to find an on-line video of Ali G speech. When I viewed it, I thought it was funny, but extremely short. Most Class Day speeches hover around the 20 minute mark. I did a little more snooping and I found a transcript of Ali G’s entire speech. Apparently, Harvard edited out a lot of his remarks from the on-line video. Among the highlights cut out is this little snippet:

Checkit, me agreed to speak here today coz me wanted to talk to de brightest minds of our generation, to see what makes Harvard de most special university in de world, and also coz dey agreed to pay for me flight over here and hotel room. Sorry to bring dis up now, but when u iz told dat your hotel bill is bein paid for, u naturally assume dat dat includes essential extras like breakfast AND special interest pay-per-view movies. Imagine my surprise den dis morning, when I was given a bill for $164. Me was actually tryin to SAVE Harvard money by buying the 24-hour ‘slutfest’ packages at $19.99, rather dan paying for individual films at $11.99 each. Which would have cost u – [go thru them] Young and Tight….Backdoor Burglar 2……Backdoor Burglar 3…..Campus Confessions….Asian Fever…Shaven Buffet [get lost] twice dat one… Cold Mountain – dat was a mistake, Backdoor Burglar 4 ….almost 490 bucks. I mean come on, some of it was even research for dis, I iz sure one of de cheerleaders in ‘Ivy League Amateurs’ was wearin a Harvard sweatshirt…..

Be sure to check out both the video and the full transcript, funny stuff.