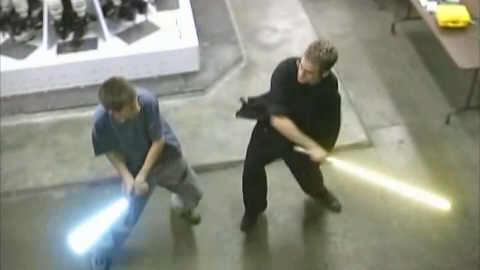 Star Wars fans are an active group of people. Some of them express their love of the SW universe by collecting toys, others make what are called fan films. These are home-made movies that attempt to explore an aspect of the movies that hasn’t been seen before. Fan films are usually share three common things:

A while back I discovered a fan film that had none of the three things above. Quite simply, it is the most impressive home made Star Wars film I’ve ever seen. It was made primarily by a gentleman of the name Ryan Wieber. I believe he was only a teenager at the time of filming. His visual effects work eventually got himself a job at LucasArts. The fight choreography is excellent, but what really stands out are the visual and sound effects. It’s amazing what a lot of talent and some hardware/software can do for you.

Wieber’s site can be found here. The link to the film is here. Get the large version of the movie if you can.