I’VE COME A LONG WAY BABY… OR HAVE I? 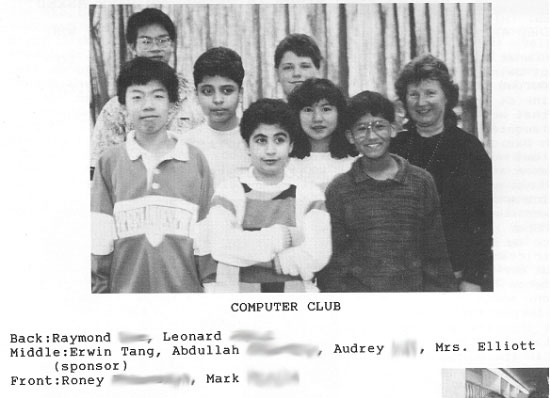 The last time I was at my parents’ place, I dug out my old yearbooks and took them back to my place. I’ve only had time to flip through them, but I saw a really interesting photo of me from my grade eight yearbook.

I can barely remember what the hell we did in the computer club. We basically met after school and played around on the computer. We had these slow and underpowered Apples in the lab. Monochrome Apple IIs I think. Anyways, I vaguely remember some Choplifter-type game, but we had to pick up letters or some sorta crap. Edu-tainment I believe is the word they use these days now. Our first “frags” were still many years away.

I’m not sure why the hell we had a sponsor. I think she was there just to make sure we didn’t goof off and take the computers home with us.

I’ve lost touch with most people in that photo, but I guarantee you, with the exception of myself and possibly one other guy there (I’ll let you guess), everyone is pulling in six figures right now. And you if asked them how they did it, they’ll answer… it was the computer club.