A few days ago, some cold-hearted thief stole the pen which was affixed to my door. SJC doors are pretty plain when you move in. Unlike undergrad residences there are no message boards on your door. When I moved in, I put one on my door as a throw-back to my younger days.

I also bought a water-soluble overhead pen from the UBC Bookstore. Using some string and tape, I hung the pen next to the board.

And there the pen hung on my door for months. Then, one day, I woke up and opened my door to find… an empty loop of string, waving in the wind… some mofo had stole my pen. Who steals an overhead projector pen?

I thought at first maybe someone in the College had stolen it for their door. I took a quick tour of the place and discovered most people don’t have boards and those who do, have different pens than mine. It’s a possibility someone visiting the College might have taken the pen as well.

Stealing isn’t something new here at College. There’s a bold food thief at work too. There are fridges in the common kitchens here where you can store your food if you don’t have one in your room. Since the beginning of the year, some brazen soul has been stealing food almost weekly. It got outrageous a few weeks ago when someone baked a cake for her friend’s birthday. She placed the clearly marked cake the in fridge and a few hours later, someone had taken a chunk of the cake. Fuckers.

There’s been lots of discussion about how to punish the thief if and when they are found. Removal of genitalia has been mentioned.

Back to my situation, here’s what my pen looks like: 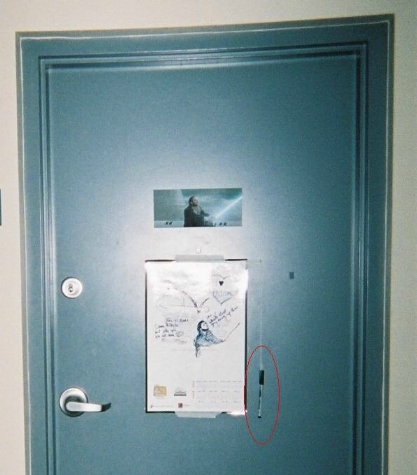 If you see it, please tell me where it is!