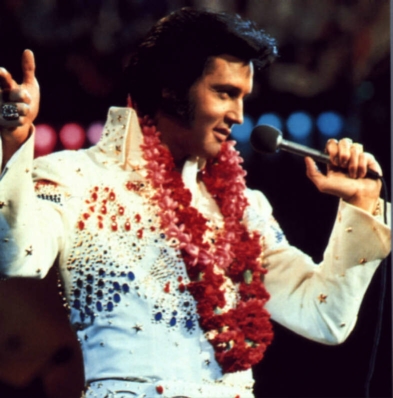 For some reason, I’ve been listening to Elvis songs recently. I downloaded a whole bunch of his tracks tonight. The quality of the King’s music can vary wildly and I’m not talking about the mp3 themselves. Some of his live stuff was poorly recorded.

In any case, I think Elvis’ music certainly transcends the passage of time. Some of his work is just as good today as it was when it was first released. I must admit there is a certain undeniable appeal to his tunes. When I was younger, I used to lump Elvis into everything that was the 70s. To be truthful, I didn’t and still don’t think the 70s were that great of a decade.

However, while Elvis certainly had some of his most interesting years in the 70s (the banana-butter sandwiches… the jumpsuits), he also should be judged by his work from the previous decades as well. In that case, he had quite a prolific career.

So, here’s to the King. A man whose interest in jumpsuits and sequins these days would pale in comparison to baby dangling and false noses.