Well, I wrote my software engineering final today. It was both good and very bad. For me, the exam seemed to be divided into two distinctly different portions.

As I started the exam, I was cruising. The first couple of sections were extremely easy, at least for me. It was smooth sailing for about an hour and ten minutes. After I finished a particular section, I paused to count up how many marks of the exam I had done. Flipping through the pages, I counted 65 marks to this point. Since the exam was out of 100 marks, I had completed 65% of the exam.

Maybe I was confident, but I was pretty sure I had aced every question up until this point. I was pleased that all I needed was 15 out of the next 35 marks to get an overall A in the course. That was less 50% for the remaining three questions of the exam. No problem right?

Oh there was a problem alright. The next question I came up against was a doozy. I froze mentally, I just didn’t know how to answer it. I was confounded. I wanted to scribble anything down to get some part marks. However, I was just so confused, I didn’t even know what to scribble down. I was clueless.

I decided to move on to the next question, hoping it would be better than the last. No such luck. Again, the same thing happened. I was just clueless. I knew what the question was asking, the concepts were familiar to me, but I just didn’t know what to answer. My brain had stalled. I scribbled some crap down and moved on. There was no way this could happen for three question in a row, especially after the great start I had.

So, on to the last question I went. I read it and I knew I was in trouble again. Fuck. I couldn’t believe what was happening. Three straight question and three straight brain cramps. How could this happen? Again, I wrote some crap that didn’t make any sense at all.

I had reached the end of the exam. I went over the last three questions and looked at what I had written. It was total garbage. I knew if I was the prof, I’d give maybe a mark or two for each answer I wrote. It was that bad.

I looked up at my watch and there was still 30 minutes left. I was tempted to leave. However, I stayed behind, hoping that I might have a revelation or three and somehow I could rescue this exam out of the fire. I spent the next 25 minutes staring at the ceiling of Obsborne Gym G. Screw it, I thought, with five minutes left, I handed in my paper and left.

I decided to graph out how badly everything went after 65%. 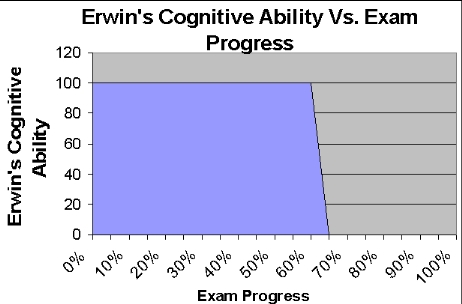