WELL THAT WAS A FIRST

Today was supposed to be a very relaxed day for me. I only had one class at 3pm followed by a 2 hour lab at 4pm. In the lab, we weren’t even expected to do anything. It was a day to get caught up on reading and other things…. well, that was the plan.

I got up around 10am and still in my PJs, I decided to toast some dinner rolls I had. I used a steak knife to cut them in half. As I went to slice open the second roll, my hand slipped, and the knife cut into right thumb. I could tell the cut was deep, but nothing to be panicky about. However, this was probably the deepest cut I’d ever had. I held the wound closed and washed it off. As I let go of the wound, it began to seep with blood. Again, I washed off the blood and kept the wound closed. I kept it that way for several minutes, hoping the blood flow would abate.

After a few minutes, I cautiously let go of the wound. The blood flow had stopped considerably, but there was still enough to cause me concern. This was going to need medical attention. Damn, I knew then my entire morning would be taken up by this.

I was still in my PJs, hair unkempt, and teeth unbrushed. Somehow with one hand, I opened two Band-Aids (TM) and applied them without letting go of the wound. With my thumb flexed, I was able to close the wound and stil have my left hand free.

Now that I had some more mobility, I managed to brush my teeth, combed my hair, and got dressed. The only problem was my shoes. I couldn’t tie with just one hand. I called Marcia and Nic down the hall, but they weren’t available. Oh well, I thought and I just stuff the laces inside my shoes.

Off I trundled to the Student Health Clinic at the hospital. I debated whether or not this was an emergency, but decided it was not. It had been five long years since I had stepped into the SHS, but there it still was, in the same place.

My wait for a doctor was quite short. A young doctor came out to get me. It looked like he was my age or even perhaps younger. In the exam room, he got me to take off the Band-Aids, and he looked at my thumb. The blood was just oozing now, rather than flowing. I asked him if I needed stitches. He said yes, probably two.

He got me to lie on the table and placed a cloth along my abdomen. I then placed my right hand on the cloth. He then went to work to get the items ready for my stitches. As I watched him get any number of gauze pads, kits, and bowls, I realized this was going to be my very first set of stitches.

When everything was ready, he turned on two examination lights, and wheeled a tray over. I swear the whole setup was straight out of ER. Next, he grabbed a swab and warned me this might sting a bit. I gathered it was going be a disinfectant or something. As he applied it, it did sting, quite a bit actually. The whole time I just looked at the ceiling.

Next, he said he was going to numb the area. This involved jabbing a needle into the area of my wound to inject the local anaestetic. This hurt like a sonofabitch! Try slicing your thumb open and then having a needle jammed into the area. He did this on either side of the wound. Seconds later, I felt my entire thumb go numb.

He then wiped my entire thumb area and index finger with what I believed to iodine or some other germ killer. The thread and needle came out next, I actually didn’t watch him put in the stitches. Three stitches later, he applied Neosporin to the area. A bandage came on next. Followed by a gauze wrap. He wrapped it around my entire hand for stability, so I looked like a prizefighter afterwards.

He said I was done, but a nurse would be in afterwards to give me a tetanus shot. I thanked him for his care and he left. The whole time I was thinking how young this guy was. He could have easily been Dave Shu’s age, who is doctor friend of mine, and he’s a year younger than me.

The nurse then came in and gave me a tetanus shot on my right arm. Strangely, this was the least painful part of my day.

I have to change the dressing in 24 hours and come back in 7 to 10 days to get the stitches removed.

I took a picture of my hand, look below. 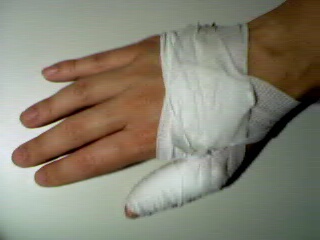