Just randomly this evening my knee started to hurt. I didn’t tweak it, at least to my knowledge, any time before that today. I didn’t do any exercises that involved my knee at all and the only thing I did with my knee all day was normal walking.

Maybe it’ll get better in the morning? Maybe this is just me getting old?

At work today, around lunch time, an artist on my team sent out an e-mail to the engineers on the team, plus a few other artists. He was informing us that one of the pipelines for the art data seemed to be broken. The message itself wasn’t out of ordinary as we’re doing lots of new things. Less than a minute after I got that e-mail, I received another message from the artist, addressed to the same people, with the same subject line. The message body from the last message was still there, the only difference being the additional of a new sentence. I’ll paraphrase the sentence here, just so that I can protect some identities:

“I’ll meet you guys by the elevator, I just need to go take a massive dump in the bathroom first.”

Whoops. I immediately knew that wasn’t meant for the 15+ engineers on our team, plus whatever artists that were also involved. Since it was around noon, he must have intended the message for a few co-workers, most of whom he was probably on really friendly terms with. I kinda laughed but whatever, I’ve seen some pretty hilarious and unintended e-mails get sent out at work.

More than an hour passes and after lunch, the artist e-mails the same people again. In this newest message, he tells us the previous message was clearly not intended to go out to so many people and that he was extremely embarrassed. Too funny.

This week is the end of January and the first month of 2018 will pass us by. Just another 46 weeks or so until Christmas!

I’ve had salad for lunch every day this week so far. I’ll have it again tomorrow and it will be a whole work week of salads. I want to be clear though that salad for lunch sucks.

Today I skipped out on breakfast (I know, bad) and when I got my salad, I didn’t get any soup with it. I essentially just had a salad to eat all day. When 4pm rolled around, I was starving. I couldn’t concentrate so I had to go get a croissant from the cafeteria.

Salad life isn’t great but I feel like I have enough willpower to keep going for another few weeks.

This video features appearances by both Sona Movsesian and Jordan Schlansky!

As I crawled into bed with my phone last night, I discovered that there had been a tsunami warning/advisory issued not forty minutes earlier. Now, I don’t know about you, but I don’t think a normal person can read that and then decide they should just go to sleep anyways. This was breaking news and information was still coming in. I saw a map from governmental agency and the area I was in was marked red. Again, how can one see something like that and then just roll over and go to sleep?

So, I stayed up another hour or so, trying to figure out what was happening and where it was happening. After said hour, I finally was satisfied that I wouldn’t be underwater while I slept. That’s when I put my phone away and closed my eyes.

Because of the tsunami news though, I didn’t sleep as much as I needed to, which is why I’m pretty tired today. I’m going to bed early tonight. I hope there will be no news alerts when I do so.

One of my good friends and current co-worker flew to Hawaii for a week long vacation on the weekend. He and I usually meet up once a day for a coffee to shoot the breeze and take a break. With him gone for the week, I won’t have my coffee buddy. He says I’ll find a way to adapt but I think I’ll just drink my coffee alone at my desk. Anyways, happy Monday everyone!

Last week I wrote about the discontent I had for the new people running the studio cafeteria. The food is simply not that great. We have an internal Slack channel for discussing studio matters amongst employees. Everyone is free to say whatever they want. Since the beginning of the year, the daily conversation has been dominated by complaints about the food. I agree with most of the complaints.

This week, I tried the beef chili twice, and each time it was too salty to eat. It was disgusting. In between that, I had a chicken orzo soup one day. That soup was so bland, it almost seemed like someone had tried to make it taste like nothing. I don’t know how you can go from too salty to no salt in the same week.

The meals and entrees seem to want to remove choice from the employees. You can no longer choose what sides you want for an entree. Before you could choose a starch or no veggies, or just veggies, or both. Now, you just get whatever they want to give you. Often, entrees will come with two starch sides and no vegetables. That’s not really healthy.

I’ve decided to get just get prepackaged salads from now on. These things are consistent in their quality, are healthy, and while they don’t taste all that wonderful, it’s cheaper and better for me.

I hope I can lose some weight going forward as well. 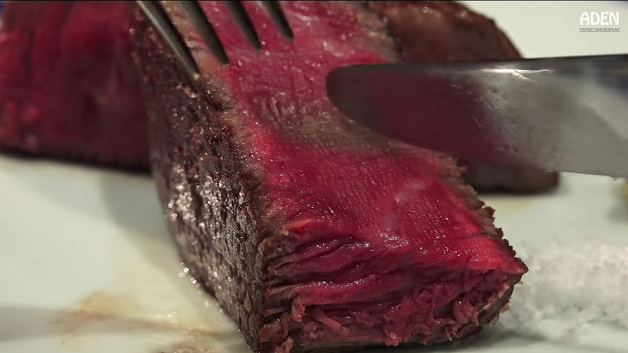 This evening I got into the part of YouTube that features cooking videos. The still image you see above is from this video. I’ve been really into teppanyaki videos lately. A few weeks ago, I had my first teppanyaki style meal. The beef I had was incredible. I’d like to go to Japan one day and have teppanyaki there.