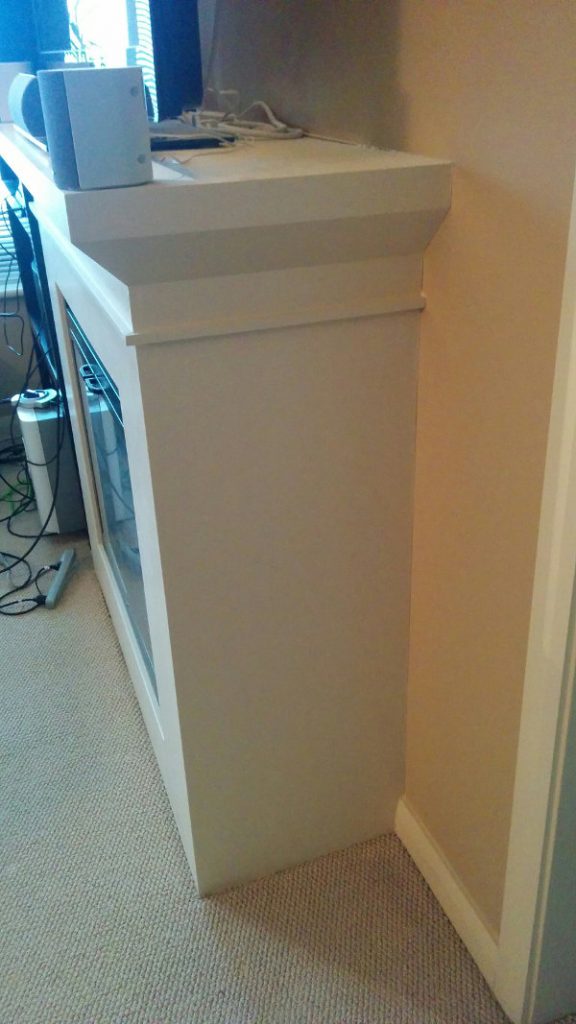 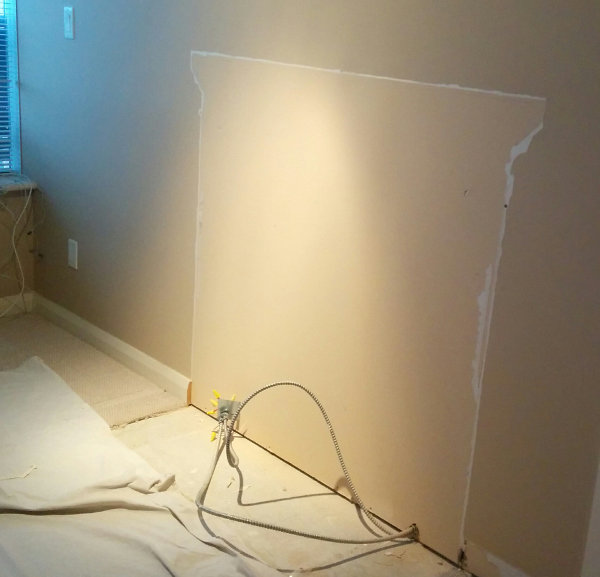 The home reno company that I signed up with sent two of their dudes over this morning. They were polite and courteous from the start which I appreciated. I had cleaned up the area around the fireplace so they had lots of room to work with. The one exception was my TV. It might be considered a relic now since it’s a plasma and it weighs about 80 lbs. The contractors were nice enough to lift the TV off the fireplace for me.

Once that was done they got right to work on removing the fireplace. Unfortunately, I wasn’t able to get any info on how the fireplace was attached to the wall so they had to discover that themselves. It only took them about five minutes of exploratory smashing and prying to figure out the fireplace mantle had two screws which held it in place against the drywall.

In less than ten minutes they were able to pull the mantle off the wall. The mantle was actually just a hollow shell made from pieces of wood. To my relief, behind the mantle was actual drywall. I was somewhat afraid there would be a giant hole there and it would require a massive drywall patch. This probably saved me a few hours of extra contracting work.

The electric fireplace insert required a bit more work to remove since there was wiring involved. One of the contractors had to cut the wires to insert and then cap off the wiring. It looks like it’s a 240V connection.

With everything finally out of the way, they mixed up some drywall mud and covered the areas of the wall where the mantle met the wall. They left it in a paint ready state so that if need be I could paint it tomorrow if I wanted to.

Unfortunately, that’s all they could do today, leaving behind three remaining tasks. First, the pictures above don’t show it but there are two outlets that need to be moved from their current position six feet above the floor, down closer to the ground. Second, you can see that long silver wire conduit that’s sticking out from the wall. That needs to be tied off in a more permanent state. Lastly, you’ll noticed there’s a massive gap in the floor moulding where the mantle used to be. Unfortunately, one of the contractors told me they don’t make this particular moulding anymore. To fix this, they can either make a custom length of moulding back at the shop for me or they can just completely replace the moulding on this section of the wall with something new. For the second option, I’m not sure how that would work given the new moulding would need to connect to the old one in the corner.

Anyways, the first two tasks require an electrician to come in and we’ll be scheduling that work tomorrow. It would have been better if the electrician was available today as well. The moulding will also need to be installed on another day too.

The one thing that won’t be addressed in the near future is the big chunk of missing carpet. I’ve always been quite dissatisfied with the carpet in my apartment so I’m not going to look for the same carpet and try to patch it up. It’s also very likely they don’t even make that carpet style anymore. In the short term, I’ll probably just buy a rug to cover up the spot.

After all these years I’m glad the fireplace is now gone and only a few more things need to be done!