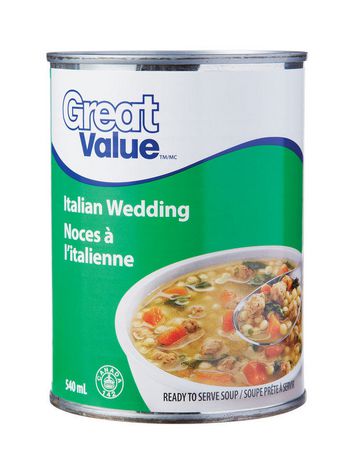 Some of you might remember that sometime in May I discovered the culinary delight that is Italian wedding soup. Oh boy, did I find it delicious. The first few cans I bought were on sale from Campbell’s. When you buy from them, the quality is consistent and usually pretty high, at least as far as canned soups go. Once I devoured the initial batch, the sale was over though. I found myself at Walmart in the soup aisle, where I saw Walmart’s own brand name of “Great Value” soups. I’d never tasted a can of Walmart soup before. Walmart’s Italian wedding soup was almost half the price of Campbell’s. It wouldn’t hurt to try it out, would it?

On Saturday evening, it was approaching the midnight hour when I was getting a bit hungry. It was time to try the Walmart soup. After I opened the can and dumped the contents into a saucepan, I noticed it didn’t smell that appealing. I checked the expiry date on the can and it was good for another three years. Maybe it just smelled like this. There didn’t seem to be a lot of meatballs compared the Campbell’s version. As I heated up the soup, I was very wary and that weird, almost medicinal smell did not go away.

After stirring and heating thoroughly, the soup was ready for a taste test. With a spoon, I gingerly scooped up a bit of pasta, a few meatballs, and a bit of that spinach they had in there. In the mouth it went. I immediately detected notes of garbage, followed a strong middle of expired medicine, with a lingering aftertaste of both. It was horrendous. Not believing a soup could be that bad, I had to taste it again. I brought another spoonful into my mouth where I confirmed I had just heated up a saucepan full of bitter disappointment. I could not continue and I began to worry whatever stain and stench the soup emitted would be embedded into my cookware. I immediately dumped the soup out and composted the solids.

Do not buy this soup and even though I haven’t tried any other soups from Walmart’s “Great Value” line, I’d caution anyone thinking about them. Prepare for disappointment, unless you like your soups tasting like garbage.