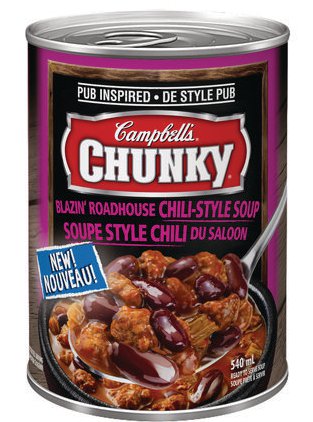 I was at the supermarket recently in the soup aisle. I’m fond of the Campbell’s Chunky soup line of products. I refuse to pay more than $2 a can for these things but it was my lucky day as they were on sale for $1.50 a pop.

I noticed they had a new kind of soup I’d never tried before, “roadhouse chili-style” soup. Chili and I have a long history. For many years I did not enjoy chili as I did not like the taste nor the texture of the beans used in chili. Some chilis are extremely spicy as well and I’m not particularly fond of spicy foods. For better or worse, it was Wendy’s chili that won me over. Their chili isn’t spicy at all and they cook the beans so that they go down really smooth.

So I saw this can of chili from Campbell’s and I decided it was worth a test. On Tuesday evening, I heated up the chili as my snack after a very light dinner. As with all Chunky soups, no water was required, just heat and serve in a saucepan. Also, since I’m lazy, I eat the soup right out of the saucepan as well.

I immediately noticed that this chili was more spicy than I’m used to. This chili was packing some heat. I also wasn’t a fan of the texture of the beans, a bit too rough for my tastes. It wasn’t terrible but it wasn’t my favourite type of chili either.

About an hour after I finished eating, I began to get very, very gassy. I was dropping sonic bombs every ten minutes. It was quite the sight (or sound) to behold. No matter how much air I passed, there was more to come. I eventually had to go to bed but that did not stop the relentless wind coming out of my backside. I had a slight worry that I might even poop the bed while sleeping.

Upon waking, I was relieved to see I had not pooped the bed during the night. I did discover, however, that I continued to be gassy. I began to wonder how long this would last. This question was answered in the early afternoon when I had what can only be described as a bowel movement of significant distinction with regard to many unspeakable qualities. It was after this that I stopped producing above normal amounts of gas.

I’m not sure what was in that chili that caused this. Was it the type of beans? Was it the spiciness? Or perhaps the combination of the two? Whatever it was, I am not going to try that type of chili ever again.