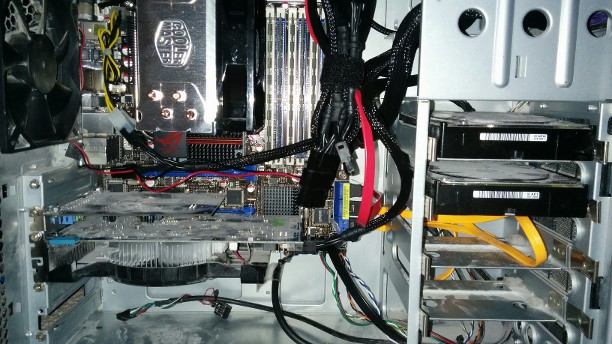 I woke up today and headed off to an electronics supply store. As I mentioned in my last post, I was hoping to get some metal standoffs, which would allow me to connect my new CPU cooler to the stupid ass backplate which was glued on. It took me just over an hour of my time and I had to brave the non-stop monsoon rains that are currently plaguing Vancouver. On the way back, I stopped off at IHOP to get a late lunch. Man, I love places like IHOP and Denny’s.

Upon returning home, I didn’t waste any time in trying to screw the standoffs into the backplate. They didn’t fit. These were the closest fit I could find in the store and nothing short of making my own custom pieces of hardware would solve the problem this way. The four standoffs cost about seventy-five cents each but I wasn’t really concerned about they money at this point. There was only really one solution left. I had to pry this damn metal plate off the motherboard somehow. Like I mentioned previously, the Internet said heat was the key, like using a hair dryer.

I cursed silently before heading right back out into the rain. There’s a drug store a few blocks from where I live and it was the easiest and cheapest place for me to get a hair dryer since I didn’t own one. I was prepared to pay a maximum of $20 for one. When I got to the store, I found a Revlon one for $18. It even had two attachments, including one that concentrated the airflow into tight line. This would be useful.

As I waited in line to pay, it dawned on me how much extra money and effort I had expended on this little project that was supposed to be fun, easy, and quick to complete. I almost began doing the math on how much I’d already spent versus buying a new motherboard and just bringing over the CPU and the RAM. I stopped myself because I didn’t want to know the answer but now that I think about it I believe I still come out ahead, even though it’s real close.

Once I got home with the hair dryer, I went right back at it. This project was going to be finished tonight one way or another. It would either be a success or I’d somehow ruin the electronics or some components trying to get the backplate off. I started off perhaps a bit too eagerly with heating the adhesive under the metal plate. I had the hair dryer on the highest setting and even though I was moving the dryer around, one corner of the plate got very hot without me realizing. It became very hot to the touch and I feared I had damaged some of the components on the board. The good news was this corner of the plate was now the easiest to start prying off. The heat definitely had softened up the adhesive and it was pliable to a certain degree. I used the corner of an old plastic rewards card from a bookstore to slide underneath the plate where I could. I had to reapply the heat about five more times (this time on the lowest setting) along the edges. After each time, I could loosen more of the plate from the adhesive. I was very careful not to use too much force to pry the corners and edges off. Every time I felt the resistance getting too high, I’d heat it up again. Overall the process took about fifteen minutes to finally get the whole plate off. The adhesive underneath the plate was extremely thick and it left some residue on the board. I did not bother cleaning up most of it.

I wanted to stop and celebrate this moment but I wasn’t done. I still had to get back to the original task and installing the new CPU cooler which I got on Saturday. This task, fortunately, was much quicker. It took all of five minutes and for everyone’s reference, this new backplate is screwed on not stuck on with glue. The next step was then to mount the motherboard back into the case connect up all the wiring again.

Because I have such bad luck, I was almost certain that my computer would not boot up after I finally had solved all my hardware issues. To my great surprise, everything just worked, which is why I can write this post that you’re reading now.

Now some of you might be wondering if all this effort, money, and frustration was worth it. From a technical standpoint, I guess yes because I ran some tests and in certain circumstances my computer is now twice as fast as it was before. I also learned a lot about CPU cooling that I did not know before and I now know how to install one of these (and uninstall pain in the ass ones too). It was also a great exercise in perseverance, patience, and dealing with frustration.

I’m so glad this is now over. I can play games again and move onto the next items on my to-do list.