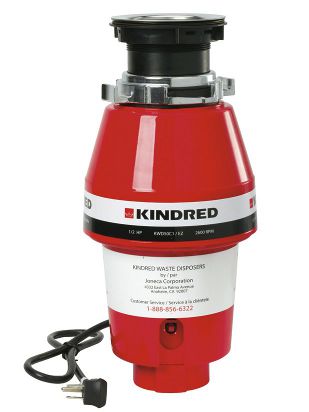 As I mentioned in my previous post, a plumber showed up at my place today to look at my busted garbage disposal unit. He looked at it to see if he could visually detect what might be jamming the whole thing up. He couldn’t see anything at first glance so he went and uninstalled the thing to take a closer look. I gotta admit, he didn’t seem too difficult to take thing out but then again he’s got years of experience and I don’t.

Unfortunately, the garbage disposal unit was also not draining, as well as not grinding. This meant it was holding water inside of it and not letting it through to the pipes. The plumber said this was odd since just because the motor doesn’t work doesn’t mean it should also block the drainage. So he dumped all the gross water in it into a tub that he brought along.

With it uninstalled, he could look at it more closely. He used a screw driver to sorta try to move the impeller plate around but it was stuck. I had tried this previously but he probably had way more leverage with it uninstalled. He then checked the grind ring for any blockages but he said it looked clear to him. He quickly put everything back into place and we tried turning it on. Nothing.

He removed it from the sink again and tried a few more things before putting it back in. We flipped the switch and were treated to nothing again. It was at this point he said my garbage disposal unit was done and I needed a new one.

I probably could have decided on a few different courses of action here. The first would have been to get the unit looked at by the manufacturer, like actually open it up and take a look at the motor inside. The problem here is that the manufacturer of the garbage disposal is one of these weird companies that’s difficult to locate. I checked the Internet and they definitely weren’t located in Canada. I wouldn’t even know where or how to send this thing back to them (out of warranty of course). This option seemed very impractical to me.

The second option would be to buy a new garbage disposal unit myself and get it installed by myself or possibly this plumber or another one. The purpose of installing a new unit myself is obviously to save on the labour cost, which for plumbers is the largest expense for these type of house calls. The question then would be, how easy would be it be for me to install this thing myself. I have no doubt I could probably do it if my life depended on it but how what type of frustrations would I face in the process? Would I screw it up somehow?

The third option was offered by the plumber himself. He said he could get me a new and better garbage disposal unit and install for me for $300. He told me that he’d be able to buy it at wholesale prices at a supplier instead of stores like Home Depot or Rona. While he was on the phone to check for inventory, I looked up the unit he wanted to get and at retail it was selling for about $160 plus tax. Now I don’t know how much of a discount he was getting on this thing but I’m guessing the $300 was gonna break down to half towards the unit and the rest towards labour. Was I comfortable with paying him $150 to uninstall my old one, try to fix it, drive to the warehouse to get the new one, and then install for me? That was real decision to be made here.

I am absolutely positive I could have saved myself some money if I decided to buy my own new unit and installed it myself. Yes, money would definitely be saved but would frustration? I tend not to be the most handy of men around the house. This thing had also been broken since late July. In the end, I just wanted it fixed, so I told him to go buy the damn thing and install it for me.

At the end of the day, I have now have a more powerful garbage disposal that’s quieter and that also has a longer and better warranty (in home). Such a privilege wasn’t cheap but now at least I can grind food down my drain again.