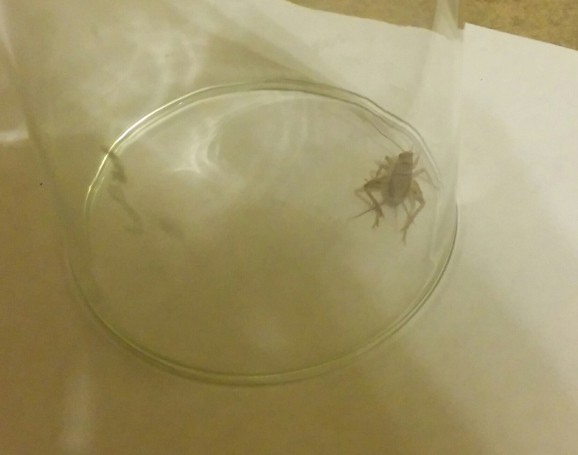 Earlier this week, I was in my bathroom on the toilet, taking care of some business when I noticed some movement in my peripheral vision. I almost ignored it because I thought I had imagined the movement but I looked anyways. There on the bathroom tile was a rather large insect. I had no clue where it had come from only that it was an insect that I hadn’t seen much before.

I quickly finished up my business, wiping in the appropriate places, flushing, and then scrubbing down my hands. Luckily, the insect wasn’t moving around too much and it was in the general vicinity of where I first saw it. Upon closer inspection, I saw it had two really long antenna with a long body. I initially thought it was a cockroach which really worried me. Cockroach infestations are serious business and you never really just have one cockroach. How could this happen? While I ain’t the most fastidiously clean guy out there, I never leave food lying around and my organic garbage is always sealed underneath my kitchen sink.

I quickly decided I had to capture this thing so I took a glass I wasn’t really using anymore and made it into an insect prison. The thing jumped or at least it tried to jump a significant distance once I placed the glass over it. I then ran over to my computer to Google “cockroaches”. After looking at some cockroach images and then looking again at my visitor, it appeared that I didn’t have a cockroach in my bathroom. The back legs were all wrong. So what was this? Could this be a cricket? I then Googled “cricket” and sure enough all the photos looked a lot like my friend under the glass.

I was relieved at this point because crickets aren’t anything to worry about especially compared to cockroaches. How did he get in my bathroom though? Did he drop down from the ventilation grate in my bathroom ceiling? If so, how did he get in there in the first place? He or she could have entered in through my sliding doors at my balcony but how does a cricket get 28 floors up?

I briefly thought about releasing the cricket onto my balcony but I was afraid he might find his way back into my apartment and then start chirping in the middle of the night. For better or worse, I sent him into a large garbage bag that I was about to take down to the garbage room later that afternoon.

I hope to not find any more interesting insect visitors in my apartment.