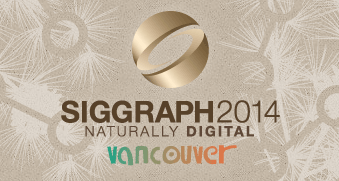 This year’s SIGGRAPH returns to Vancouver after being held here back in 2011. Three years ago, it was the first time that the main conference in the computer graphics field was ever situated in a city outside of the US. It’s my understanding that the 2011 conference was such a huge success that organizers decided to return to Vancouver as soon as practically possible (which was three years given that subsequent venues had already been decided upon).

I had a chance to attend SIGGRAPH, just visiting the exhibits, back in 2011 and it was one of the most impressive conferences I’ve ever seen. I was most impressed by the fact that thousands of the smartest people from animation studios, software developers, FX houses, university researchers, and game studios all assembled to showcase their work and to take in the work of others in one giant conference. The weather was great for the entire time and I think many people who hadn’t been to Vancouver were quite impressed with the city and conference venue.

I’m lucky enough to have another ghetto exhibits only pass again for SIGGRAPH 2014 but I’m still super excited about going. There’s going to be lots to see and hopefully a lot of swag to pick up! My only disappointment is that SIGGRAPH has already chosen venues up to and including the 2017 conference, so the earliest it can return to Vancouver will be 2018. That is in the future though and there’s still this year’s conference!