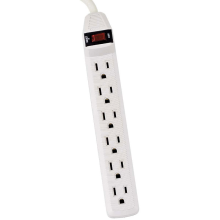 Like many of you, I have numerous power strip or power bars around my home. These wonderful electrical devices allow you to plug in more devices than you have outlets. I’ve always thought that if these things break or fail, they do so completely. By that I mean, if they don’t work anymore, you don’t get any power to your devices. I found out that is wrong.

I had a particular power strip that was being used to power my Xbox 360 and my A/V system (speakers and receiver). One day I popped in a Blu-ray disc and I couldn’t hear anything once the movie started. My receiver said it was decoding DTS but there was no sound. Once I returned to the menus, I was back in Dolby Digital and I could hear that fine. Weird. I popped in another disc and the same thing happened. No audio once I was playing DTS.

Next, I tried playing a video game. I powered on my Xbox 360 which seemed fine as I could see the dashboard come up. I then pressed the button to open the disc tray. The motor whined a bit but nothing happened. I tried several more times but I couldn’t get the tray to open. It looked like I wasn’t going to watch any movies or play any Xbox 360 games.

It took me a day or so but I thought it was crazy that both my A/V system and my Xbox 360 somehow broke at the same time. It was just too much of a coincidence. I then looked to see where these two items were plugged in. They were both plugged into the same power strip and were the only items in that strip. Trying a hunch, I re-arranged somethings and plugged both my A/V system and Xbox 360 into either a different strip or right into the wall outlet. Wouldn’t you know, I could hear DTS audio again and my Xbox 360 was able to open the disc tray again.

I discovered that power strips can fail and still provide some but not sufficient power to your devices. I’m no electrical engineer but I’m thinking it was giving enough voltage but not enough current. My Xbox 360 could run its pure electronics but once it needed juice to turn some motors, it failed. Now I know my A/V system requires more juice to decode DTS audio than it does Dolby Digital.

I replaced the power strip with another one and everything is working great now. And I learned something interesting about electronics.