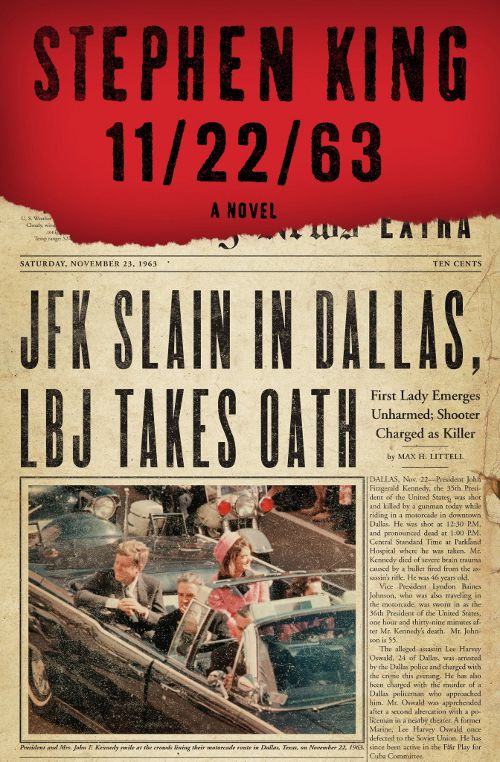 About a year ago I was at a book store when I decided to buy, 11/22//63, my very first Stephen King novel. I know he’s a very talented and prolific writer but the horror genre that he best known for isn’t my first choice when it comes to reading. Even amongst the many movies (both TV and film) that are based on his works, I’ve only seen It which I thought was fantastic.

I did some research though and I discovered 11/22/63 was different though. It was not a horror novel and it featured two subjects that I’ve been fascinated about since I was just a small child: time travel and the Kennedy assassination. I remember I was in elementary school when I first learned about how JFK died. One evening, there was some sorta TV special that came on focused on the conspiracy theories surrounding his death. Since I was a kid that knew nothing about 1960s, many details on that eventful day were revealed to me for the first time. It culminated in me seeing the Zapruder film, uncensored, for the first time in my entire life. This was way before the advent of the Internet so this was also the first time I saw a man’s head get blown apart. It just happened to be the President of the United States. The footage shocked me. The raw reality of such an important man being killed despite all the people surrounding him was hard to believe. From that day forward, everything around that historical day kept my attention.

I finally got around to reading this book this summer, around July and I only just finished it this weekend.

So in King’s novel, the premise is actually quite simple. The protagonist, one Jake Epping, goes back in time from 2011 to September 9, 1958 with the singular goal of stopping Oswald from killing Kennedy. King deals with the time travel concept in an interesting way. There is no time machine per se, no stainless steel car that is the time vehicle. Time travel is done via a portal and the way he describes it, it sounds very much like a wormhole. There are also rules for the portal which is explained by Jake’s friend Al Templeton. It is Al who initially discovers the portal in the back room of his diner. We are told the portal always goes back in time to the exact same second of September 9, 1958. Anyone returning from the past always comes back exactly two minutes after they left, no matter how much time they spend in the past. Changes done in the past are immediately reflected in the world once you return to the present. Any changes in the past are reset if you go back to 1958 once more. Those are pretty much the ground rules in the novel.

Al actually spends a considerable amount of time in the past. In fact, he is the one who comes up with the idea to save Kennedy, embarking on his own journey to kill Oswald. Unfortunately, he decides he needs to wait until 1963 to do the deed, thus necessitating living out five years in the past. He is prevented from doing so in the fourth because he develops lung cancer. After spending four years in the past, he decides to return to 2011 because he knows he’ll die before getting to Oswald. To Jake, Al is a healthy older gent one day and then the next, he looks years older and in terrible health. Al divulges everything he knows about the portal to Jake. He also gives him all his notes about Oswald that he had been compiling for the years he spent in the past. Al almost begs Jake to take over the task because no one else can. After a few short test trips to 1958, Jake agrees. Al then dies, leaving Jake with no one else to turn to about the portal.

Jake enters the portal for real this time, taking with him several thousand dollars in 1950s cash, Al’s notes on Oswald, and a few sports results (for betting purposes). Now it’s here that I knew this would not have worked if Jake was anything other than a white male in his 30s. There was still a considerable amount of racism and misogyny in the late 1950s, so the job would have been much, much tougher for let’s say a black man to blend into the world of the past. I tried to imagine myself in the late 1950s and I’d even have trouble getting a normal job, let alone stop Oswald.

Before Al died, he told Jake he had to be sure Oswald was the only gunman that day. For whatever reason, that meant Jake couldn’t kill Oswald right away in 1958 and he’d have to follow Oswald around, more or less, for five years. Now here’s where I would have done things completely different. I would have become a hermit almost, keeping to myself, and making minimal contact with people as possible, while trailing Oswald. Jake, instead, ingrained himself into a small Texas community, getting a job as a substitute teacher, making many friends, influencing students, and falling in love with another teacher. I would have done none of those things which could have endangered the mission. I thought King did a great job of describing the five years that Jake spent from 1958 to 1963. I got a good sense of what America was like back then, from the food to the music to the cultural norms of the day. At times, I thought I was reading a genuine history book rather than a piece of fiction.

At the end of the novel, I thought that King had written a brilliant piece of work but I was left with a considerable amount of sadness.

In the end, Jake did accomplish what he wanted to do. He stopped Oswald from killing Kennedy and JFK lived to finish his term, even winning re-election. All of that, however, came at a great personal sacrifice for Jake. Before Oswald could be stopped, he killed Sadie Dunhill, who was the only woman Jake ever truly loved in his life. Before stopping Oswald, Jake was viciously beaten by mob thugs, who didn’t like how he came up big on some improbable sports bets (which he made to fund his mission). The beating cost him his spleen, broke his kneecap, his arm, some ribs, and caused a brain injury which led to some amnesia. After finishing his mission, he had to return to 2011, leaving all his friends behind in 1958. All of that, however, paled in comparison to what he found in the new 2011 where Kennedy had lived. Jake discovered that all the time traveling he and Al had done, coupled with all the changes to the past was causing the universe to rip itself apart. Unless, he wanted to watch the world destroy itself in a few years, Jake had to go back to 1958 to reset everything and then immediately come back to 2011. Everything he had done, the five years of living in the past, watching the love of his life die in his arms, and stopping Oswald was all for nothing. So that’s what he did. He went back to 1958, which undid everything, and though he was tempted to go meet Sadie again, he returned to 2011 almost immediately. In the end, Jake was left with being five years older, full of memories he couldn’t share with anyone, lingering physical problems, and an undying love for a woman he could not have. In the end, Jake couldn’t change the past, which is perhaps what King wanted us to think about after we got to the last page.

So I’d recommend 11/22/63 to anyone who’s previously enjoyed Stephen King’s works or anyone who has a passing fancy in time travel and/or JFK. The book is nearly 800 pages but don’t let that discourage you. It can go by quick. With the fiftieth anniversary of the assassination coming up this November, it’s worth a read.