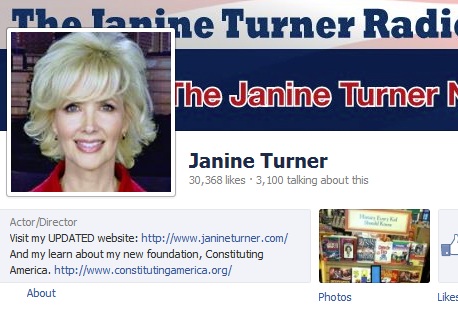 Some of you may know of actress Janine Turner who starred in the show Northern Exposure. Turner is one of those rare Hollywood actresses or actors who are conservative and aligns themselves with the Republican party. She also runs her own fan page on Facebook.

The page on Facebook is interesting to say the least. Turner herself writes posts about keeping American conservative, protecting the American constitution, frequently quoting passages from the Bible, and fearing that liberals and the President Obama are going to destroy the United States from within. Of note, is the blurring of lines between the Bible and government issues, as if she and her followers would prefer if America were to be guided and laws made according to what’s in the Christian Bible. Turner and most right-wing conservatives love to rally behind the American Constitution but conveniently pass over any part that mentions the separation of church and state. Like most of their type, they pick and choose parts of the Bible and Constitution for their own benefit.

The most entertaining and perhaps somewhat scary part of her Facebook page are the comments from her followers. The comments almost always fall into one of a few categories: something about the Constitution being neglected or destroyed, a quote from the Bible, something pro-gun, and last but not least something criticizing President Obama. The comments about President Obama have their own subtext as you can tell some people just don’t like him because he’s part African-American. They don’t exactly have the cojones to write that publicly but you can tell they kinda want to write it.

I encourage you to go read some of the comments yourselves but if you’re like me, you might be able to read just a few comments before you get a case of the sads. If you want to see a little insight into what is wrong with the United States today, that page is a good start.