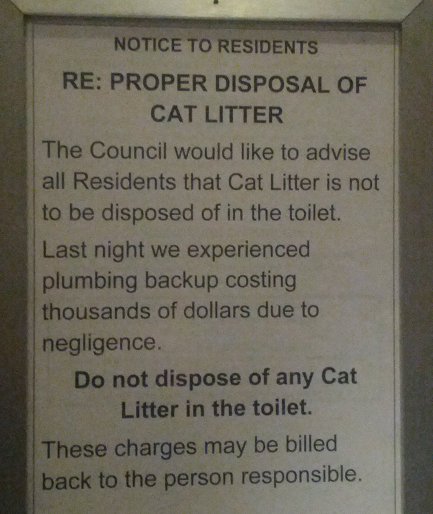 So the notice that you see above was posted inside the elevators of my building last week (click to enlarge). Someone decided to flush kitty litter down their toilet. It clogged the pipes and caused their unit and dozens and dozens of other units to lose all use of their plumbing for almost a whole day.

I’m puzzled as to why someone would think that was an ok thing to do. The majority of all cat litter must be disposed of through the garbage. Even the supposedly “flushable” kitty litter can still clog pipes according to many articles on the Internet. Most litter bags warn people not to flush used litter down the toilet.

Even if you didn’t read the warning, you’d think people would figure out not to dump it down the toilet. Kitty litter clumps when it gets wet. It turns into a solid basically. The cat owner’s cat demonstrates that every day when it urinates into the litter. I’d make the assumption that the daily reinforcement of what happens to litter when it comes into contact with moisture would rub off on the cat owner but I guess it didn’t.

Now this wouldn’t really bother me but as you can see on the note, the repairs were not paid for by the offending party. As it currently stands, the strata council had to pay for the plumbing work which means some of my money had to go fix the problem. If this forces my maintenance fees to go up next year, I’ll be angry. I hope the council bills the unit instead.

One thought on “THAT’S DUMB”