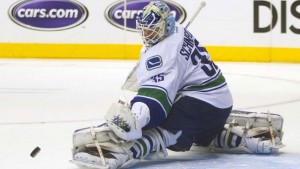 During the day, I was almost certain two events were going to transpire tonight: I was going to win $350 and Cory Schneider was going to play his last game in a Vancouver Canucks jersey. None of those things came to pass tonight. I didn’t win my $350, though I’ll have as many as three more attempts to get me that cash. Cory Schneider also played an outstanding game tonight, ensuring he’ll get at least one more game as a Vancouver Canuck.

In a perfect world, I’ll never win that bet and Mr. Schneider gets fifteen more wins in a Canuck jersey before he gets traded in the summer.

4 thoughts on “LIVE AGAIN TO FIGHT ANOTHER DAY”