In my last post, I wrote how I have about seven weeks left at Radical Entertainment before my contract ends. I’m happy to report that before I leave, you now have the chance to see where I work. G4TV did a little story on us last week and it aired today in the afternoon. The reason why they came to the studio was to chronicle the adventures of some contest winners. A few game retailers worldwide partnered with Radical to hold a contest. The winner would get flown out to Vancouver, come visit Radical, and get their faces photographed. Those photographs would then be turned into art assets so they could be placed as pedestrians in the game. These people would literally be in the game.

So last week the winners, who came from around the world, arrived at the studio for the visit. G4TV came along to document the visit. A camera crew filmed the whole thing, from the airport, the hotel, and of course the studio visit. They must have filmed hours of footage but it got all edited down to less than three minutes. If you look really closely at the video above, I actually make an appearance at about 1:30. For those who don’t have eyes like Legolas, I’ve circled myself in the image below: 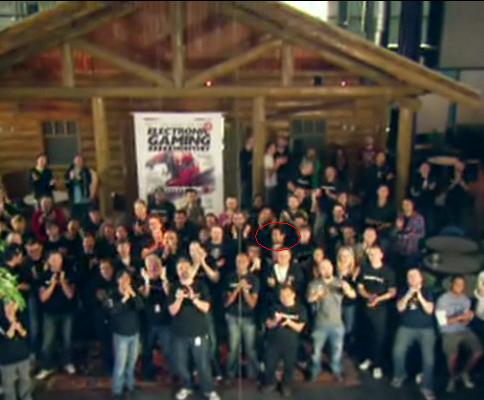 Can you see the spinach that was stuck in my teeth that day?