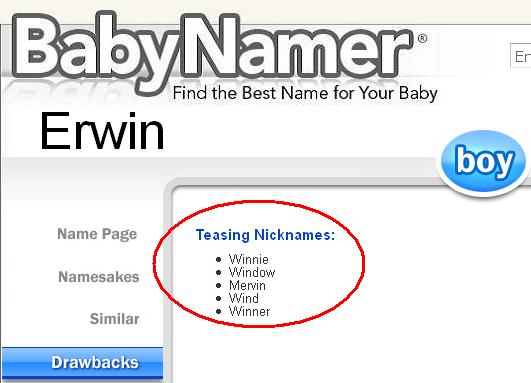 Sometimes I like to go to random baby name sites to find out what they might have to say about my name. I haven’t done this in a while but I somehow managed to stumble upon another baby name site. I looked up my name and it didn’t really give me any new origin information that I didn’t know already. They did, however, have a section called “drawbacks” which I’ve never seen before. As some of you know, a few people call me “Winnie” which I quite like actually. Not a drawback. I’ve never had anyone all me “Window”, probably because it’s downright stupid. I don’t get a lot of “Mervin” but a few people have called me “Irv” when I was younger and I didn’t mind one bit. No one has called me “Wind” probably because I’m not fast as such. On the other hand, I do like passing it and on a frequent basis as well. I’ve gotten “Winner” before because if you reverse the syllables in my name, that’s what you get. Who doesn’t like getting called a winner?

As a comparison, I decided to look up the name “Adolf”, which for reasons I hope are obvious is not the most ideal name for a baby boy. While the same site did point out that “Adolf” was the first name of the world’s most nefarious evildoer, look at what it had to say when it came to “drawbacks” of having that name: 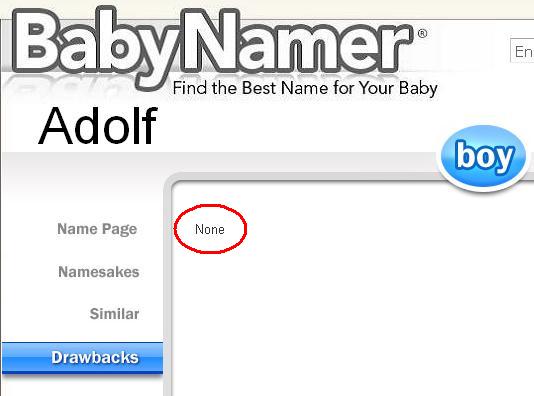 Yes, that’s correct, according to this web site, there are no negatives to naming your baby “Adolf”. Yet my name has five separate reasons why it might not be a good name. “Honey, it looks like Adolf is the way to go, sorry Dr. Schrödinger.”