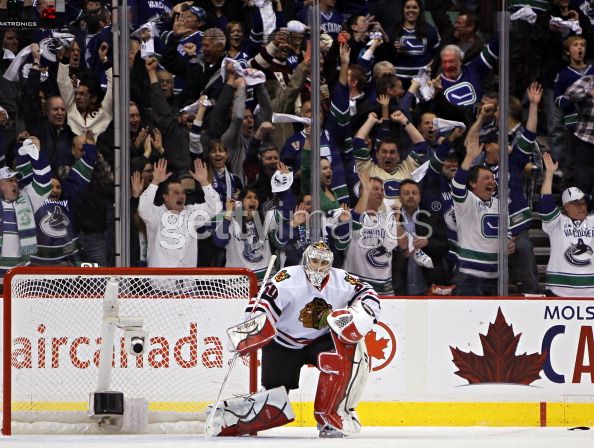 Tonight the NHL 2011 playoffs started. It was the night that Vancouver ice hockey fans have been waiting for since October. The Canucks managed to defeat their recent arch-rivals, the Chicago Blackhawks by a score of 2-0. As expected, there was much jubilation in the city of Vancouver, most of it misplaced. News reports showed fans streaming out of the arena, some so elated, it was as if they had witnessed the Cup being awarded that night. One fan even had the gall to say Chicago would be swept in four games.

I hate to be “that guy” but I’ve been watching hockey for over two decades. One game wins you nothing. Being that excited about a single win is like whooping and hollering because you found a penny. I don’t expect people be emotionless during a game but some people need to be realistic about what a single playoff win really means in the grand scheme of things. It takes sixteen wins to get the ultimate prize. There’s a long way to go still. Then there’s that comment that Chicago would be swept; that will be highly unlikely. Chicago carried the play throughout the entire second period, which means they’re capable of playing well against the Canucks. They did get shutout tonight but that was more luck than anything. The Blackhawks hit the post four times tonight. An inch or so the other way and we might have had a different game. There is another stat to keep in mind. The Canucks won the first game in both of the last two series against Chicago. Each time, Vancouver went on to win only one more game and they eventually lost to Chicago.

In the end, I am pleased they won the game but the series has just begun.