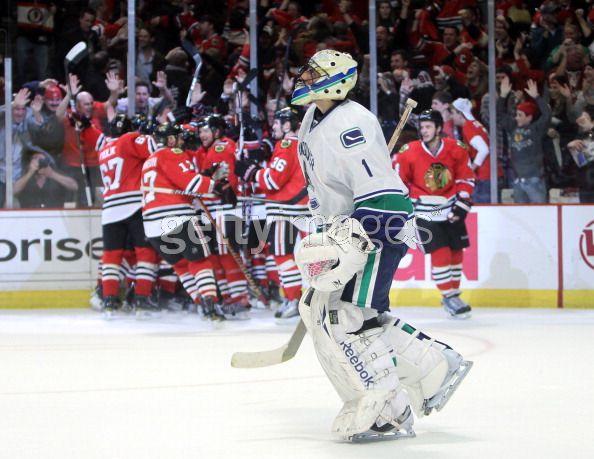 On Tuesday evening, the Vancouver Canucks and the Chicago Blackhawks will meet in game seven of their opening round series of the 2011 NHL playoffs. After having won the first three games of the series, the Canucks have lost the last three in spectacular fashion, getting soundly massacred in two of those games. Should they lose game seven, and it’s looking like they are almost assured of losing, they will become only the fifth team in NHL history to have gone up three games to none, only to lose the next four games and the series. This failure on the part of the Vancouver Canucks cannot be overstated, it is an epic collapse not only in hockey terms but in professional sports as a whole. In general, losing a series in this fashion would be embarrassing and shameful but the circumstances surrounding this Vancouver team makes the failure several orders of magnitude greater. The Canucks were the best team in the entire league in the regular season by a wide margin, thus winning them the President’s trophy. They scored the most goals while giving up the fewest. They possess two players who were the back to back Art Ross trophy winners, as the player who scored the most points in the league. It is also generally accepted that they have the Selke winner, a forward player who shows the most skill in the defensive portion of his game. The Canucks also have, most ironically, a Vezina nominee, the goaltender deemed as best in the league. On paper, they have all the tools necessary to be successful at the game of ice hockey. So if you add in the fact they were the President’s trophy winner and that they have won or are going to win several individual league accolades, the manner in which they are about to lose makes the failure grander than any failure the NHL has seen in decades. In fact, I am having trouble finding words to accurately describe the magnitude of this failure. This would be one of the greatest examples of choking in the history of all professional sports.

Now some of you might be wondering why I’d be writing all of this as a foregone conclusion even before the game is played. While the results of a sporting event is theoretically unknown before the game is played, in practice, the Canucks are essentially done. Having won the last three games (some in devastating fashion), all the momentum is on Chicago’s side. The momentum I write of is of the speeding freight train kind. It will be nearly impossible for the Canucks to regain the momentum before it’s too late. The Blackhawks know in their head and their hearts they can beat the Canucks. They have nothing to lose. The Canucks on the other hand, I am not sure if all the players believe they can actually win the next game. They can give out all the sports cliches they want but I’m suggesting that some of them have some genuine doubts as to their abilities to perform now.

Also, they just haven’t been able to raise their game to that level that playoff hockey requires. The Canucks have been atrocious since game three. No one player seems to have taken upon himself to elevate his play to do what is necessary to achieve success. Though this might mean scoring a timely goal, it can also involve key defensive plays like blocking a shot, preventing a pass from going through, or winning a key faceoff. The players who understand what needs to be done in the playoffs and then can make those crucial plays are “playoff warriors”. You can always identify these guys during the playoffs. At the end of the game, their name sticks out because everyone can see they made key plays that turned the game in his team’s favour. The Canucks currently do not have a single player who can be called a “playoff warrior”. The last Canuck player who truly deserved this title was Trevor Linden and he retired in 2008.

Last but certainly not least, is the issue of goaltending which is the major reason why the Canucks are in the situation they are in right now. Goalie Roberto Luongo has been terrible since game three. He has given up 11 goal on 53 shots in the last three games for a goals against average of 3.67 which is unacceptable. His save percentage in the last three games is 79% which is good if you’re a five year-old pee-wee player but for a man making $10M this year, he is essentially stealing from his employers. Luongo is apparently starting game seven even though I believe putting in Cory Schneider is the right choice. Yes, Schneider had two miscues outside of the net that directly led to Chicago goals. While he was in the net, however, he was solid. He looked sharp and more importantly, he didn’t give up a horrible soft goal that Luongo is now famous for. Fixing Schneider’s problems in game six is easy, just don’t leave the net that often. The problems with Luongo cannot simply be fixed before game seven and I’m not even sure if he’ll ever get over this massive setback.

It will be an extremely painful end to the Canucks’ season. The fans in Vancouver will be stunned and asking themselves what went wrong (the answer to that is above). Oh there will be much heartache in the city. The 2010-2011 version of the Vancouver Canucks will go down in history as one of the greatest failures in professional sports. It will be a long, sad summer in the city of Vancouver.