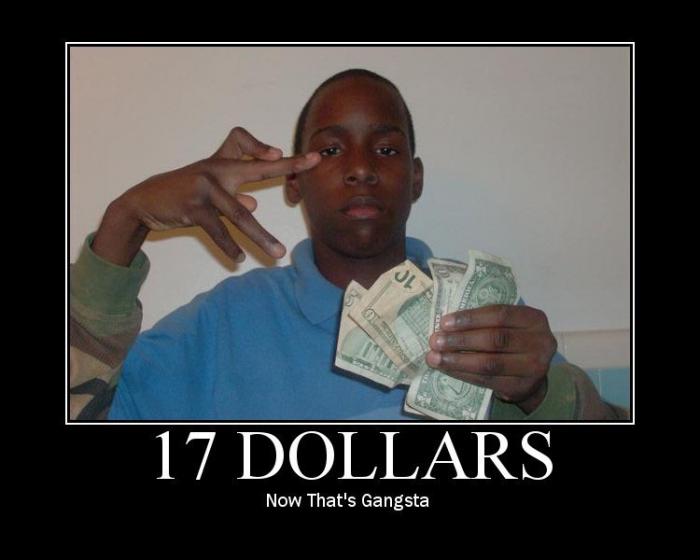 The above image is an example, albeit a bad one, of the practice taking a photo of yourself with considerable amounts of cash. Usually, this type of behaviour is reserved for “gangsta” types who think they’re “hard” and have made some measure of success, thus being able to display large amounts of cash in a single photo. Perhaps this is a better example. The photo is supposed to convey how “rich” that person is and that they’re no broke-ass punk. I think it’s the truly dumbest way to flaunt your wealth.

Just consider for a moment a person who has let’s say $10K to show off. If that person gets the $10K in cash and then shows it off, that cash is just sitting there doing nothing. It doesn’t make more money for the gangsta while he’s there holding his money. The smartest thing to do with money is to use it to make more money. There are many ways to do this, starting with the simplest, a savings account that earns interest. The better way would be to diversify the investment into several different sectors, fixed income solutions like bonds, equity like stocks, and even mutual funds. Let’s not forget real estate which is usually a good investment.

Flaunting wealth by taking a photo of yourself with cash just means you don’t know what to do with money. You don’t see Donald Trump or Richard Branson doing these photos. Why? Because they’re too smart to have their wealth in straight up cash. Ask the Donald to show off his wealth and he’ll point you to all the real estate he owns. Ask Sir Richard to display his wealth and he’ll gesture towards his fleet of jets used for Virgin Airlines. Those are real displays of wealth because that money is making more money.

Hell, even the average homeowner taking a picture of his or her home is more impressive to me. They get to live in their money and it’s gaining value at the same time. That sure beats a stack of $20s lying on some gangsta’s Biggie Smalls duvet cover. Show me a gangsta displaying a land title in a photo and then you’ll get some respect from me.