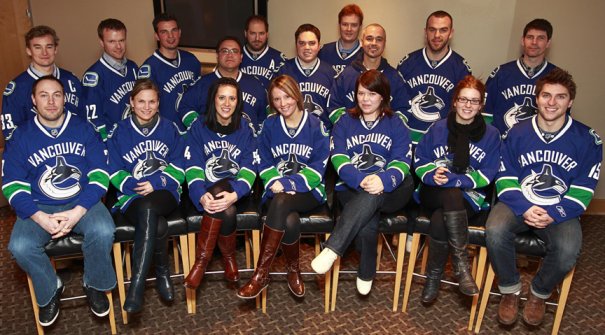 Say what you want about the Vancouver Canucks on the ice but off the ice, there is no doubt they are a classy organization. A few years ago the club invited the fathers of the players to join their boys on the road so they could share the experience of being a professional hockey player. It was a great bonding experience for both fathers and sons. This was followed up with a road trip where the players’ mothers got to accompany their beloved sons. Again, you can imagine how special it was for the players to have their Moms along.

Not to be outdone this year, the Canucks invited their players to bring along a sister or a brother on a short two-game road trip to the US. This is another great idea from the team and I know I certainly would be excited if my NHL playing brother invited me along. The Canucks allowed the siblings to travel on the team plane, bus with their brothers to practice, eat with them during team meals, and of course attend the games. What an awesome way to show them what NHL life is like on the road (which mainly is fantastic).

Though most of the players invited their brothers, I was glad to see five sisters on the trip. Some of the players had no choice as their only sibling was a sister. Some players had to choose a sibling since they had more than one. I wonder how that went over with the sibling that didn’t go.

The Canucks have posted several galleries that highlight various moments through the siblings road trip. There is gallery one, gallery two, and gallery three. Last but not least, the sister of defenseman Dan Hamhuis, Erin Hamhuis was picked to be a guest blogger during the trip. She has written a couple of posts detailing when she was told of the trip, how nervous she was that she might be the only girl on the trip, and what a thoughtful big brother Dan is. She even sneaks in a bit of juicy gossip. Apparently, one of the siblings, whom she will not name, overslept in the Dallas hotel and missed the bus to the game. Wow, how embarrassing! Have a read at the day one and day two posts.

The siblings were good luck as the Canucks were dominant on the road trip, beating Dallas and Phoenix handily!