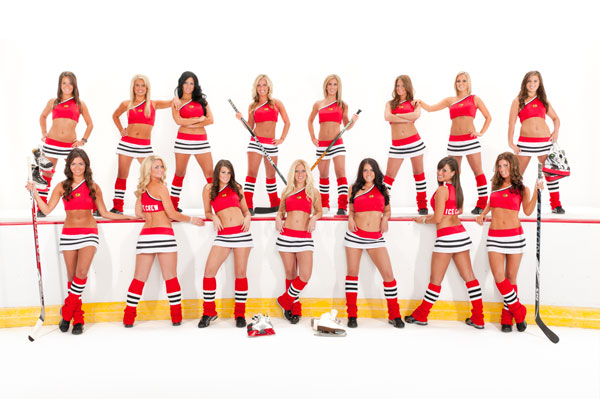 Recently, the Edmonton Oilers became the first Canadian NHL team to announce that they would be introducing official cheerleaders to their home games. Over 20 other teams in the league already have cheerleaders or women as part of their “ice crews”. The announcement was not met with unanimous excitement however, as there were indeed some opposed to the development.

It’s interesting to me that previous to the Oilers decision, all teams that had cheerleaders were exclusively American. I don’t think that was a coincidence. Part of it is that the whole cheerleading thing is more typical of an American sporting tradition than what what we have up here in Canada. The primary reason for the cheerleaders though is because hockey is much harder to sell to your average American sports fan than your average Canadian. In Canada, if you so much as even hint there might be some ice, a puck, and two teams, people will show up and pay to watch whatever hockey might transpire. It’s not that simple or easy in the US, especially in those traditional hockey hotbeds like Carolina, Florida, and Tampa Bay. It’s clear that those organizations are not relying on the team or the sport itself to get fans into their arenas.

For those teams who have decided to “enhance” the fan experience, they’ve gone one of two ways. Some teams have cheerleaders in the stands where they can implore fans to cheer louder. Other teams have opted to have the ladies as part of the “ice crew”, where they are responsible for cleaning off the snow that accumulates on the ice. In either case, the young ladies are usually attractive and wearing outfits that easily reveal their level of fitness. Of course, some teams dress their ladies more conservatively than the others. Depending on your view, both the Chicago Blackhawks Ice Crew and the Dallas Stars Ice Girls are some of the best or worst examples of this. Just purely for research purposes, if you’re interested, there is a web site that reports all the latest news on NHL cheerleaders and ice crews.

Now here’s my opinion of the bringing cheerleaders to Canadian NHL teams. I think when a hockey organization decides to do this, it’s a clear admission that they realize the product they put on ice isn’t good enough to keep fans returning to the rink and supporting the team. Again, is it a coincidence that the worst team in the entire league last year became the first Canadian team to bring in cheerleaders? I believe there is a fundamental difference in how hockey is viewed in Canada and how it is viewed in most other US cities.  In Canada, if a team is winning and successful, people will pay for tickets no matter what superfluous entertainment is in the arena. Take for example, the team in my city. The Vancouver Canucks have sold out every single home game for over five years, without the use of cheerleaders or ice girls. In fact, the Canucks even have dudes who clean off the snow.

The US teams can do whatever they want to get more attention to their organizations. In Canada though, I think what the Oilers have done detracts from the good old hockey game. Perhaps this is just my Canadian side showing but I believe that the game of hockey has a certain purity to it that doesn’t need all this extra fluff to make it more attractive. Hockey is an amazing sport that combines speed, skill, and toughness. The majority of Canadian hockey fans love the game for what it is at the most basic level, not for what promotions happen to be at the arena that night. I don’t believe the other Canadian teams should follow what the Oilers have done. Let the product on the ice speak for itself.

To close, I do want to mention that I’m no prude when it comes to attractive women wearing small bits of clothing. Hey, I like looking at pretty ladies as much as the next guy but there’s a certain time and place for that which is usually right before bed in front of an Internet connected computer.