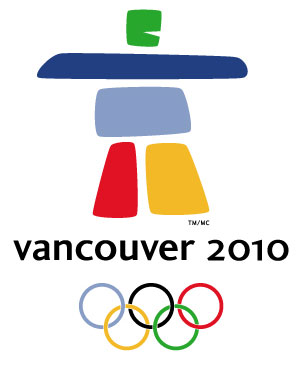 One of the many unfortunate things about no longer working in downtown Vancouver is that I haven’t been able to watch the preparations as we approach the start of the Winter Olympics. Since I haven’t been downtown in about two weeks, I decided to head on down this weekend for a look.

Even before reaching downtown on Skytrain I could see many places were already ready for or very soon to be ready for next Friday. By Science World, I could see that the Athletes’ Village was already occupied by people as flags of many different countries could be seen hung out on balconies and in windows. The road closures by Canada Hockey Place which had begun several weeks ago were now fully in effect. Olympic fencing stretched around seemingly everywhere. I could also see some heavy-duty security checkpoints that police had setup.

Once in downtown proper, I decided to walk along Burrard, Granville, and Robson. It wasn’t difficult to see that downtown Vancouver is a major hub for all things Olympic. It appeared that every third person on the street had Olympic credentials around their neck. The Olympic volunteers were also everywhere, easily visible with their bright blue jackets. With close to 20000 volunteers spread between Vancouver and Whistler, they’ll be hard to miss for the next three weeks or so. I like their uniforms and I bet a lot of them will enjoy keeping them after the Olympics are over.

There also seemed to be a large number of tourists already in the city for the Olympics. I saw a lot of people decked out in gear representing their home nation, walking around and taking in the sights. I wondered where a lot of these people are staying and how expensive this trip must be for almost all of them.

I then wandered off to a few specific locations. I started off with the area near Canada Place because I used to work right next to it (and still have fond memories of working there). Canada Place and the new convention centre is where most foreign journalists and press will be working during the Games. Canada Place is home to the main press centre and the VCC is where the international broadcast centre is located. It was actually pretty neat walking around there. The streets surrounding the two venues have been closed to public vehicle traffic but if you’re just a curious pedestrian, you’re free to saunter right up either location. Getting into those locations is another story though. Entry to those places is access-controlled and I saw various checkpoints with heavy security. There was also a large concentration of blue jacketed people here.

Just for kicks, I went down into the food court in Waterfront Centre to grab a snack, just like old times where Black Box was downtown. Even the McDonald’s there got a makeover for the Olympics with all the employees wearing bright red shirts with “Canada” on them. Strangely, McDonald’s even had an “ambassador” of sorts, walking around chatting up food court patrons. Everyone else there seemed to be related to the Olympics in one fashion or another, either working as security, official, volunteer, or visitor.

My last stop was the LiveCity venue in Yaletown. There are two LiveCity venues and the other one is located near W. Georgia and Cambie. Each venue will be providing free entertainment each day and night while the Games are on. It’s a great way for people who can’t get tickets to events to experience the Games in a fun and free manner. The Yaletown venue is on the site of David Lam Park. There’s fencing around the entire park now and the venue isn’t ready until Friday. Nonetheless, I did a quick walk around the perimeter. I saw workers near the water setting up a water display. The venue looks to be quite large in size and I could hear music coming from the large tents that had been already set up. I think it’s awesome that there will be two large venues that will allow people to party each night of the Games.

From my observations today, a couple things come to mind. First, I cannot imagine the organizational power that is required to prepare and setup a major, epic event such as an Olympic Games. There literally must be a million details that must be accounted for and taken care of. I’m actually quite impressed with modern society that we’re able to pull off something this big without something major going wrong.

Second, I think that despite whatever anyone thinks of the Olympics being here in Vancouver, it’s too late to stop it. No amount of protesting or dissent now will make the Games any cheaper or divert any money to social programs or programs any sort. Sure, you’re free to protest it while the Games are on and if that’s your thing, you should have the right to do so. I would suggest though that everyone try to experience and enjoy at least one little thing about the next two and a half weeks. There are a lot of free events being put on in the city. Hell, if you even just talk to one person from another country, I think that would be worth it. The number of times an event of this magnitude comes to your hometown is small.

Last but not least, it’s clear to me that a lot of people are quite excited and ready for the start of the Games on Friday. Just from the vibe I was getting from being downtown on the weekend, it’s going to be a very interesting next few weeks.

2 thoughts on “THE OLYMPICS DRAW NEAR”