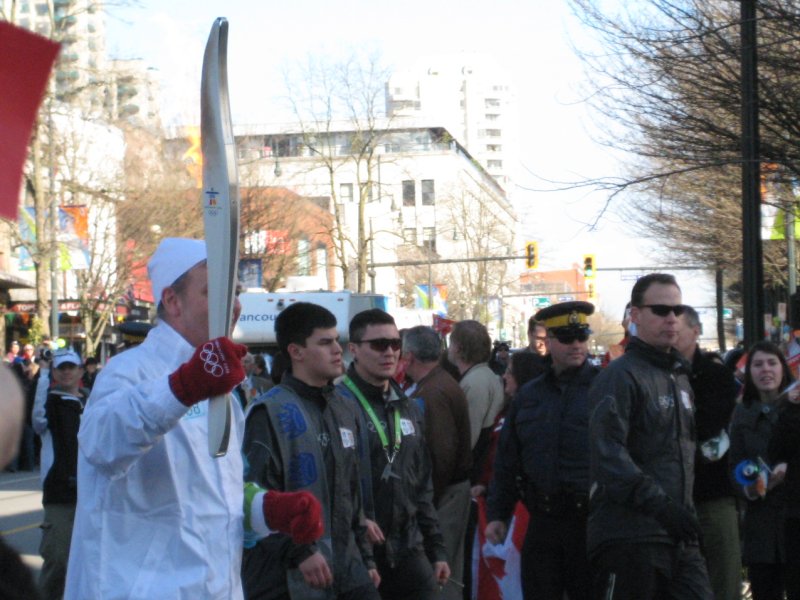 Of all people, it was actually a friend in Australia who let me know that the Olympic torch was coming through my community on this day. Bryan informed me about a week ago that this was the day the torch would be winding through New West. At the time, the exact route had not been announced, so I wasn’t sure how easy it would be for me to see it. Then just before the weekend, the route was updated on the official Olympic web site. To my surprise, the route would be going by my apartment building just half a block away. Not only would it be close, it would be coming by at a reasonable hour, around noon. The torch has gone through thousands of communities and people have lined up for it, in the early morning and through bone-chilling temperatures. I figured it would be a mistake for me to not go see the torch bearer run by when the effort to do so was less than buying a loaf of bread at the corner store.

The night before, I decided the best place to see the torch bearer run by would be the corner he or she would have to turn to get off Columbia and head towards the quay. The schedule listed that time would be about 12:30pm. I left my apartment this morning around 11:40am or so. By the 11:45am, I was standing at the corner that I wanted to be at. There were already people lining the street. The crowds were pretty thin but it was easy to see that something out of the ordinary was about to happen. Also lining the street were balloons that the city had put up. A few volunteers were handing out Olympic flags branded by Coke. An energy drink company was handing samples to the people already waiting.

With the crowds being somewhat thin and the time plentiful, I decided to head off to the quay to see if the vantage point would be better there. The torch was headed there because it was scheduled to get on a paddle wheeler ship where it would taken across the Fraser River for the rest of the route. There were a lot more people at the dock and the sight lines weren’t as good, so I headed back to my corner.

When I returned there still wasn’t that many people waiting with me and I was able to reacquire my “front row” position. As I waited though, more and more people appeared out of nowhere. As the minutes went by the sidewalks began to fill with people. Because I was at the edge of the sidewalk, no one seemed to want to stand in front of me because traffic was still going at this point.

As time drew closer to 12:30pm, I witnessed the massive amount of logistical support that goes with running a torch relay through an entire country. First, I spotted a helicopter in the air. Then, the first of many support vehicles showed up. Some were specific vehicles carrying support personnel who needed to go ahead of the torch bearer. Others were sponsor vehicles from Coke and the Royal Bank. These vehicles had speakers and dancers on each side to pump up the crowd and get them into a celebratory mood. Most of these vehicles had RCMP escorts. No matter what jurisdiction the torch goes through, the RCMP are there to provide primary security.

At this point, regular traffic was still getting through but people were nearly spilling into the street waiting for the torch bearer. Not soon after, more RCMP vehicles showed up and these began blocking off traffic. People took this cue to now stand in the middle of the street. A minute later, RCMP officers on foot arrived on scene to move people back if they were in the way. The officers then just stood at strategic spots and they waited along with everyone else. Another minute went by and I could hear cheering up the street. The torch had to be nearby. A squad of RCMP motorcycle officers went by slowly. Behind them was the actual torch bearer.

He was running at a deliberate pace, not too fast but not too slow. I didn’t recognize him but he appeared to be in his 40s and he looked genuinely delighted to be running with the torch. The crowd was cheering at this point and a lot of photos were being taken. The torch bearer had at least two escorts running with him to ensure things went smoothly. He ran slow enough that I was able several photos of him. My planning turned out pretty well as he ran by me with less than six feet separating us.

Though he wasn’t running that fast, as soon as he went past me, I realized the moment was gone. He disappeared into the crowd down the street as he made his way towards the paddle wheeler. I guess other people thought the same way because a stream of people began following him. It was at this time that I met up with a friend of mine that I knew from grad school. She works nearby and she just happened to be watching the torch come by across the street from where I was. We decided to walk towards the quay to see if we could catch up with the torch before it left on the boat.

We managed to catch up to the torch as it boarded the boat and another torch bearer took responsibility for the flame. I managed to snap a couple more pictures of the torch on the boat before it took off.

In the grand scheme of things, it’s pretty inconsequential to see some dude run by with something on fire in his hand. I admit though, I’m really glad I took the time out to see the torch. It’s one of these once-in-a-lifetime things and I’ll remember this for a long, long time.

The torch will make it’s way through the rest of Vancouver during the rest of the week before it arrives at BC Place for the opening ceremonies on Friday. If it’s at all convenient for you to see it, I think you should make an attempt.

2 thoughts on “THE OLYMPIC TORCH COMES THROUGH NEW WEST”