UPDATE: I just phoned the property manager and it turns out that my letter was actually read. It’s just taking a few days for a response to be drafted up and mailed out to me. I will keep everyone posted.

In a previous post, I mentioned how I left a letter for my strata council to read. I left the letter in a mailbox in our lobby mailroom. The mailbox is labeled as a suggestion box and a place to leave correspondence to the strata council. After going five days without any kind of response to my letter, I decided to peek into the slot of the mailbox. The mailbox still contains an envelope and I’m pretty sure it’s my letter. I can’t see the front of the envelope so I’m not positive it’s still my letter but usually in these types of matters, my guess is right.

I left my letter in the mailbox on Sunday evening. The strata council meeting was scheduled for Monday evening. I left myself some leeway of about 24 hours for them to open up the mailbox and get all the correspondence in there. How hard is it for strata to do that? Why have the mailbox there if they’re not even going to use it?

It’s nearly December and I still haven’t turned on my heat in my apartment. A crazy part of me thinks I might actually be able to go through the entire winter without turning my heat on. Of course, now that I typed that, watch the temperatures go near freezing soon.

On winter coat front, I’ve managed to get away with not wearing my heavy wool coat. I’ve added a scarf to my ensemble but I’m still getting away with a lighter jacket.

So last week Activision released Tony Hawk’s new game entitled Tony Hawk: Ride. Because of some weirdness with apparent distribution issues, review copies of the game were not sent out in advance to reviewers (as is the usual case). As such, reviews are now only trickling into print and the Internet.

So far, it hasn’t be a spectacular reception from reviewers. On Metacritic, Ride is garnering a 53 on Xbox 360, while on PS3, it’s coming in at a 49. As this franchise is really our only competition in the marketplace, our team has been following this game and its reception. We actually have two copies of the game for the team to try. Last week, everyone had a chance to play Ride including myself. I thought the board was really well-made. It feels solid and sturdy. It never gave me the impression it was a toy and I believed I was on a real skateboard (minus the wheels).

I played the game for about 15 minutes or so. In light of that, I don’t think that’s enough time for me to make an honest and fair assessment of game. I won’t make any more comments until I’ve had a chance to really play through a large portion of the game. At more than $120 though, I just don’t see myself buying it at that price.

My belief is the game will probably sell well among parents who will buy the game for their kids. I’m not sure how well it will do with older gamers who do all their game buying themselves.

Have you tried Ride? What do you think of it?

Like a lot of my readers, I get a lot unsolicited mail in my mailbox. Amongst the flyers and catalogues, I also get coupons. Sometimes the coupons are for things I have absolutely no interest in. Other times, the coupons are completely related to items I would purchase, coupons or not. The coupons from KFC fall into the latter category.

A few weeks ago, I opened my mailbox to find a series of KFC coupons in there. Some of them were no use to me. As an individual, there really is no justification for me to use any of the “family meal” coupons. Even at a paltry $30, I shouldn’t be ordering 10 pieces of chicken, fries, gravy, 3 sides, and a whole cake. Thus, the single meal coupons fit my lifestyle better. Of these, there are only two or three I would really use. Knowing this, I was about to take the coupons and go, when I spotted something out of the corner of my eye. There was another set of identical KFC coupons sticking out of the mailroom recycling slot. I looked around and then quickly grabbed it out of the slot. Now I had two sets of coupons for glorious fried chicken.

Does this make me cheap, gluttonous, or both?

If things went as I expected it to, my very first letter to my building’s strata council was addressed this evening in this month’s strata council meeting. As a relatively new homeowner, I’m still quite new to a lot of procedures and issues regarding owning a small bit of real estate.

In my letter, I mainly asked for clarification on two potential changes I am thinking about making to my apartment. The first entails replacing the blinds that were originally installed in my windows. These horizontal blinds are fairly cheap in quality and to top it off, they weren’t installed very well. As such, they let in a lot of ambient light. I am thinking of replacing those blinds, ideally with vertical ones. I have been told doing so might require permission from the strata council. I guess I’ll find out.

My second change involves getting rid of or at least altering that damn fireplace that I have to keep my TV on top of. I was at a house this weekend where they had a TV stand on the floor in their living room. Even though their TV was smaller than mine, it was just so much more enjoyable to watch it without having to crane my neck upwards. I wonder what strata will say about that change.

Since I’ve never done this before, I don’t how and when they’ll get back to me. I left my e-mail address in my letter but I’m not sure if they officially respond in that manner. The most likely scenario is that the property management company will draft up a letter and mail it to me.

This weekend, the new Twilight movie, New Moon broke the single day box office record, taking in over $72M on the Friday. The previous record holder, The Dark Knight, clocked in at just over $62M. Now, there’s been some disappointment among the mostly male “comic book” fans that the record was lost to a movie about teenage vampire angst. I personally don’t see a problem with that. I think it’s great that tween girls have something they can put their support behind and call their own. I only wish I had written the books myself because had I done that, I’d be taking dumps on solid gold toilets in my mansion right now. I digress however.

Kevin Smith appears to have the same attitude that I have. In the clip above from Comic Con 2009 held last summer, Smith opines on the whole Twilight thing. He uses some strong language at times, so if you’re offended by potty mouths, you might consider skipping this one. Nonetheless, he is quite funny.

The entire skate team has the day off today as a reward for our hard work during the last several weeks. I am going to spend the day being lazy.

For the last few months I’ve been mainly wearing denim jeans to work. They’ve been different shades of blue but for sure it’s still all denim. To shake it up a bit and to give the rest of my wardrobe a bit of a workout, I decided on Monday to wear some wool pants. Now these “slacks” are slightly dressier than jeans so I was wondering if anyone would notice.

The standard line around the studio that you give someone when they’re all dressed up at work is “when is your job interview?” That’s a joke in more ways than one. Since the entire game industry is based on a casual work environment, on any given day, about 90% of the people at work are dressed appropriately enough for a job interview for another games company. So really, just because someone is dressed up doesn’t mean anything. On the other hand, if someone wanted to move away from the games industry, well that might just mean something after all.

Anyways, only two people really said anything about my clothes. One coworker just asked why I was all fancy. Another dude said, “nice outfit, maybe you’ll be flagged as a job interviewer”. I think he was kidding. I actually don’t know any companies that flag their employees as a potential flight risk based on their clothing for one day at work. Though it would make sense. I did hear of one story where a coworker once had to dress up for work because he needed to go to a fancy dinner right after the day ended. A few hours into the day, his manager came up to him and asked if things were going ok and if he wanted to talk about anything that might be bothering him.

Maybe I’ll wear a suit to work and see what happens. 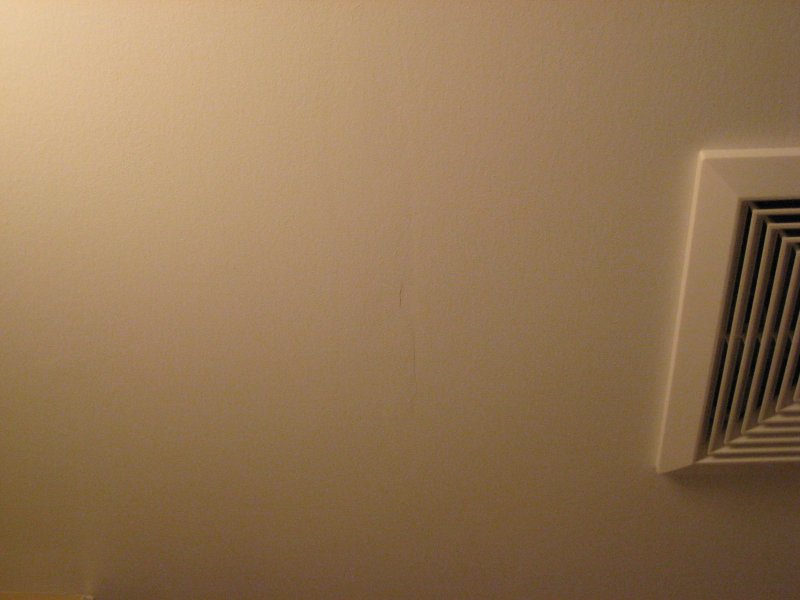 So some dude came over to my apartment this morning to fix my bathroom ceiling. For the most part, he did an excellent job. He was very thoughtful and professional, putting down plastic so that dust, particles, and paint wouldn’t get anywhere it shouldn’t in my bathroom.

The whole operation took about five hours to complete. Initially he said it might be a two-day job but he changed his assessment after the first hour or so. Before he left, it looked flawless but then as the paint dried, I saw two slight flaws.

In the picture above, you can probably see two faint lines. Compare that to what was there previously. It sure looks better but those lines still stand out for me. The short line is like a ridge of paint or something. I think I could sand it down myself and that would be ok. The longer line is an actual crack in the paint that he put down. I’m not sure if it cracked along a seam of some sort or it just happened to crack there. This seems a little bit more difficult to fix. Should I try to fix it myself? I don’t even know what shade or type of white paint he used.

Maybe I’ll call the company and see if they’re even willing to come out again to fix a minor thing like this.

Every year since I’ve worked at Black Box, which dates back to the summer of 2006, we’ve had an annual holiday party in the beginning of December. We usually get an invitation to said party in late October or early November.

This year, we’re past the midpoint of November and so far, no mention of any holiday party. It’s looking like we won’t be having a shindig this time around. Is this a surprise? Well, no. My employer just announced they’re going to be laying off 1500 people just last week. Things aren’t exactly awesome overall. Money is hard to come by for non-essential things these days. So I completely understand why there won’t be any company-sponsored merriment this year.

I do, however, recognize that just about every single week of the year on Fridays, my employer continues to supply me and others with enough beer, wine, cake, and popcorn that I could ever want. So, it’s not all that bad.