So when I woke up this morning, the mushy patch of my bathroom ceiling hadn’t grown in size which was a good thing. After getting dressed, I called the live-in building maintenance guy. He responded right away and I told him the problem. He said would come look at it right away.

Five minutes later, he was in my bathroom looking at my ceiling. After just an initial prod with his finger, he seemed to know what it was. He told me I wasn’t the first guy in the building to have this. Apparently, the builders caulked and sealed everything that met up with the bathroom floor. That meant where the tub met the floor, where the walls met the floor, and where the vanity met the floor. The one thing they didn’t seal up was around the toilet. Which meant that if any water got spilled around the toilet on the tile, it would seep right through the crack between the toilet and the floor and go straight down to the unit below. Why the builders decided not to spend the $2 of caulk to seal up the toilet is beyond me.

So that’s what the maintenance guy said was happening. He told me he’d try to get a hold of the tenant upstairs to get him to stop putting water on the floor. I was then instructed to contact the property manager who would tell me what to do to get everything fixed. I phoned that guy right away but got his voicemail.

It took about an hour for him to call me back. When he did though, he set things into motion quite quickly. I was told that a restoration company would be in touch to help me with the water leakage. I didn’t know how long they’d take to phone me but they called within half an hour which really impressed me.

It was noon by this time and they said could come by at 2pm. At 2pm on the dot, the guy arrived to take a look at the situation. He took down my info and then explained to me exactly what would happen. He was going to go back to his vehicle to retrieve two pieces of equipment: an industrial size blower and a heavy-duty dehumidifier. The blower would be directed at the spot on the ceiling. The equipment would need to be on and running 24 hours a day until Friday morning, at which time someone would come back to assess the situation again. Until then, I would need to keep all doors to my bathroom closed.

I was like, um ok. I then inquired about the possibility of using the bathroom. The dude said I could use it for sure and I could even turn off the blower in there. He strongly suggested that I keep the dehumidifier on at all times. So he set the whole thing up, turned on both machines and just took off.

I tell ya, it’s like having a wind tunnel in your bathroom. Both machines are loud, especially the blower. After a few hours, it was at least 10 degrees Celsius warmer in my bathroom compared to the rest of my place. It super dry in there too, almost like the desert. Frankly, I think it’s kinda overkill for the small size of the water leak. By 6pm, I touched the mushy patch and it was solid once again. I kept both machines on though.

Now all of this moo or moot if you prefer, if the guy upstairs doesn’t get the word to stop pouring water on the floor near the toilet. Now since I can’t get to the floor above me (I don’t have access with my fob), I got the security guy to get me access. We went up to my upstairs neighbour about three times. Even though we could see there were lights on and apparently at TV on, no one answered. I finally gave up but not before sliding a note under the door explaining the situation. I left my name and number, asking him to call me.

Finally around 10pm, someone did call. He was very understanding. I was polite but was very clear that until the toilet got sealed, he was not to get any amount of water around the floor. I got his number via call display so now I can contact him again if need be. 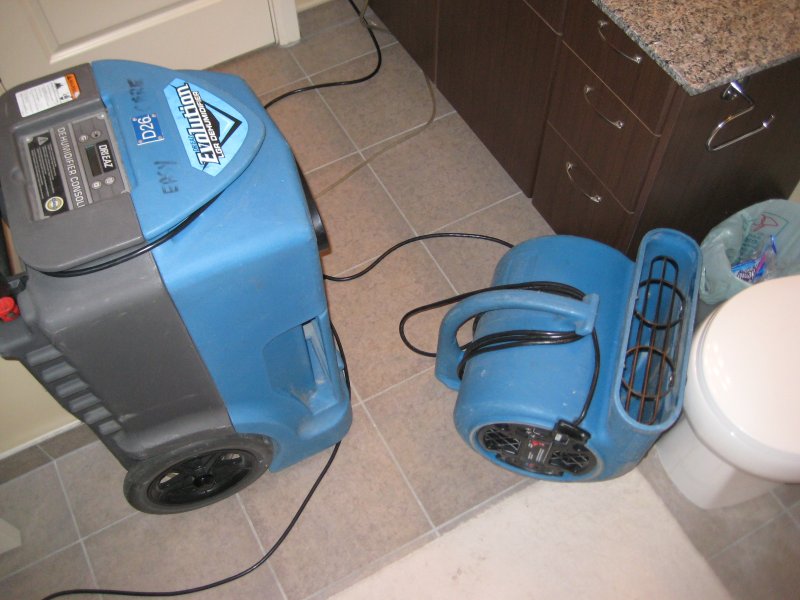 Even if the restoration company gives the ok on Friday, another contractor still has to come in and fix the ceiling drywall and repaint the whole thing. That means at least one more day away from work. What a stupid hassle!