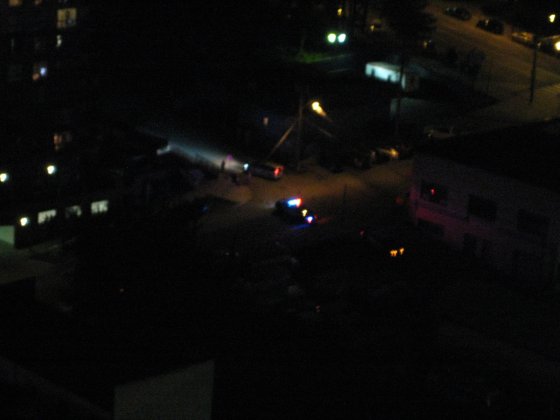 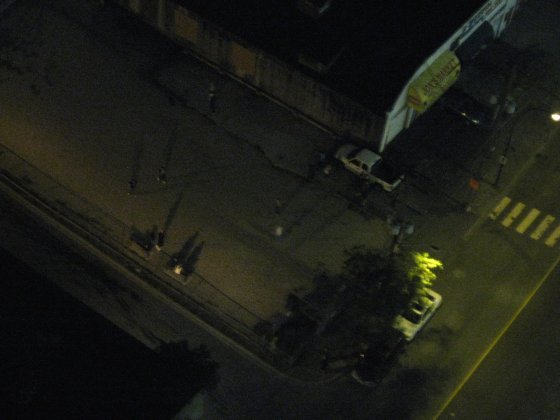 On Friday evening, I got home from work around 9pm. Having partaken in beer and cake at work, I also stopped off at Wal-Mart to get some stuff. By the time I actually got off the Skytrain, I was starving since I hadn’t had dinner yet.

When I got within half a block of my apartment building, I knew something was going on. There were lots of people in the dog park across from my building, lots more than usual. There were also lots of people on the street near the dog park. They all had one thing in common though, they were all looking up. They appeared to be looking at an apartment building one block north of where I lived. I walked near the large group of people I looked up myself but couldn’t see anything in the darkness. Not wanting to stop or even really bother to ask anyone what was going on, I kept on walking because I was in dire need of food.

In the twenty steps to my building, a couple who had been watching the proceeding joined me in going inside. We all took the same elevator up. The lady then said something interesting.

“Maybe she didn’t like the sound of a pre-nup.”

So now I had a few more details. It was probably a woman threatening to jump from a window or balcony. I wondered though how this lady knew it was marriage-related.

The elevator got to my floor so I went inside my apartment and put down all my stuff. I went out onto my balcony to see if I could see anything. I instantly saw that whatever was happening was very serious. The police had blocked off the street just north of my street. Yellow tape prevented both pedestrians and cars from entering the area. A patrol car with lights on was stationed at each end of the street. An array of fire trucks of various kinds were parked at the western edge of the scene. I could also see an ambulance parked nearby. From my vantage point, I could also see many more people out on the street corners, watching whatever drama was unfolding. The building in question in actually the building you see on the far right of the first photo.

At that time, what I couldn’t see, despite seeing so many things, was the actual window or balcony in question. That is, I didn’t think I could see the actual person in danger. Seeing all the drama below me, I quickly remembered I was starving and I had my own needs to attend to. So I put some leftover pasta in my toaster oven and then noticed my garbage and recycling overflowing. I decided to take care of that while my dinner was being re-heated.

I went downstairs to the ground floor to take care of my trash and recyclables. On the way back up, I heard the security guard on duty, explaining what he knew of the situation to a girl in the lobby.

“She hanging on the balcony and she’s apparently wearing a wedding dress.”

So that’s how the other woman knew it was marriage-related. Whatever the lady in distress was going through, she decided it was going to go down while she was wearing a wedding dress. The situation appeared even more dramatic now.

Once back upstairs in my apartment, I still had to wait a few more minutes before my dinner was ready. So, I went back out onto my balcony to take a look. Thinking I couldn’t actually see “the bride” from where I was, I casually let my eyes wander to where everyone was looking. It was then my eyes finally allowed me to see what was in front of me the entire time.

Though it was dark, her pure white dress stood out in the night. She a few floors lower than I was but she was nearly in front of my balcony. Standing on the wrong side of the railing, her feet resting on the very edge of the balcony, the bride held onto the situation with two hands on the railing. The light wind rustled her dress like it was out of a movie. It seemed almost serene except for the fact that her life was very much in danger.

As I watched stunned at what was happening in front of me, I could see her move here and there as the wind continued to make her dress flow. It was then I noticed it was eerily quiet on the street. There was no shouting, no sirens, and no panic. For a Friday evening, it was strangely quiet.

At that moment, I became self-conscious. If I could plainly see the bride, then she could see me. What was she thinking at this moment? Was she bothered by all these people looking and staring at her? What if me watching her like some sorta show was the one small thing that caused her to jump?

By now my dinner was ready, so I headed back inside to get my food. With my plate in hand, I decided to eat my dinner on my couch. There was no way I was going to sit on my patio chair and eat dinner while watching this woman go through this. The weird thing is though, from where I sat on my couch, I could turn my head and see her balanced on the edge.

I kept on eating my dinner but I couldn’t look away for long. Every few minutes I’d look over to see if the bride was still there. Every time I looked, she still was. Then, as I was down to my last pieces of Wonder Bread and hot dogs, I heard loud cheering and clapping from people around the street.

I put down my plate and headed back outside. The bride, who had been on that same spot on her balcony for so long, was no longer there. For whatever reason, she decided to climb back over and went back inside. I felt a wave of relief wash over me. People were now leaving their spots and going back to their homes. Within minutes, the police cordon came down. The police didn’t leave though, nor did the fire department. The ambulance stayed as well.

It was well over an hour before all the authorities left. I don’t know what the law is in BC but I’m probably sure the authorities didn’t just wave goodbye to the lady and let her go on with her Friday evening. There must be some mandatory mental health assessment that needs to be done and I’m sure she spent the night somewhere else where she could be monitored.

The three pictures you see above were taken before I knew where the bride was. I thought about taking more pictures after I saw her but I decided against it. Though the whole drama was very much public, I don’t think she would want the incident immortalized in a picture I took and shown on my blog.

I wonder what caused that woman to go out there and put herself in that much danger. I’ll perhaps never know.