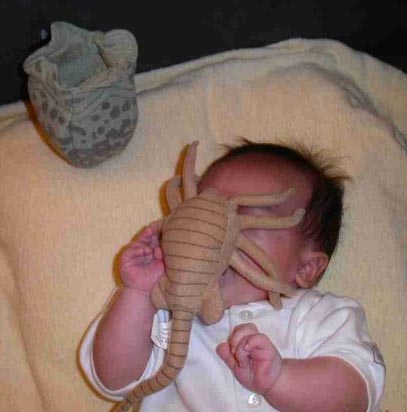 I don’t know where or when this photo was taken but I only just saw this for the first time today. My first reaction was to laugh. I’d like to think both parents of this baby have a really awesome sense of humour. In all likelihood though, I can just see the father being the mastermind of the photo. “Honey, all my buddies will find this hilarious!” I’m envisioning the less than enthused mother standing behind the father with a furrowed brow, waiting for her baby to stop being a prop for a picture.

If you don’t recognize the above objects in the picture (other than the baby), they’re from the Alien universe. Specifically, you’re seeing an Alien egg and facehugger replicated in absolutely adorable plush form! In the movies, a facehugger hatches from an egg, looking for a host creature to implant an embryo. It does so by attaching itself tightly to the face of the host. Once implanted, the embryo eventually develops into the titular creature. I’m leaving out a lot of details on purpose but that’s the general life cycle.

In any case, what a well-composed humourous photo. Including the egg, in its opened form, in the corner was the perfect touch. If you’re wondering where to get these items, it appears this is the place.

Last but not least, click here for a bonus amusing photo.