Last week as part of a promotional launch, Bondi Digital Publishing put up on the web a partial archive of Playboy magazine. It is intended that come summer of 2009, all issues of Playboy will be available for viewing on the Internet (for a price). For now, the partial archive is free to view and contains 53 issues from 1954 all the way to 2006. Each archived issue contains every single page from its real world equivalent. If you’re interested click, here to view the archive. It should go without saying that if you’re reading this from anywhere that might even remotely frown upon Internet nudity, you probably don’t want to click on that link.

I flipped through all the pages from an issue from 1977 using Bondi’s rather sleek interface. First, let’s get to the obvious stuff. How nudity is packaged and presented to people in 1977 is very different from today’s nudity. I was reminded of how much more hair people had in the 70s. Clearly, I’m referring to hair all over the human body, not just on the head. Though I looked very dilligently, it was impossible to find a model with breast implants. All the women looked natural, as if they had been barely (no pun intended) influenced by modern society. The pictorials also seemed very tame compared to what is out there now.

Now while the naked ladies were all naked and good, the most interesting aspects of my quick read through were the ads. Since each issue is in essense a snapshot of North American society at that time, I found the ads to be quite enlightening. I saved a few ads to share with you.

First, consider this cigarette ad below (click on it for a larger view):

Here we have a hunky 70s dude with his shirt half unbuttoned, sitting on the grass, with a pack of smokes, and a single lit butt out. He’s asking us, “How come I enjoy smoking and you don’t?”. It’s almost laughable now but I suppose in the 1977 that would be a legitimate question. Perhaps his smokes, Salems, were way better than any smokes that I had tried. Maybe that would get me to switch brands or even try smoking. Of course, now in the present, the correct answer would be “because you’re a dumbass that wants to get lung cancer and I know better than to die early”.

More so than social practices, the one thing that appeared to change the most was technology. In this sense, I found dozens of ads that I could have used as examples. I chose the one below (click on it for a larger view): 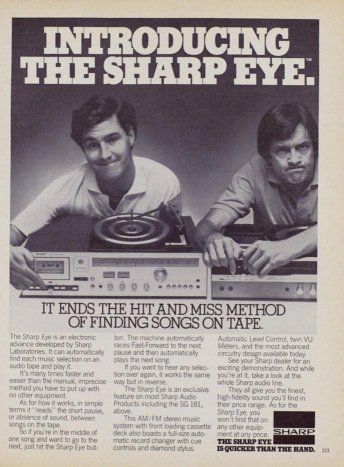 The ad above is for a system from Sharp Electronics named the “Sharp Eye” used in audio cassette players. For the young or forgetful, I’ll remind people that music was once played on small analog tapes on reels. Finding the beginning or end of a song in the middle of a tape was really hit or miss and a fanciful piece of guesswork. Now I’m old enough to have experienced this problem first-hand, so I know how stupid it was. These days of course, with CDs and MP3 files, we can get to any part of a song in an instant and with the accuracy of a laser.

Now the “Sharp Eye” system supposedly listened for the dead space in between songs and inferred those were the pauses in between tracks. If you wanted to go to the beginning or end of a song, it would just advance the tape for you automatically. Now keep in mind that even though it was automated, back in 1977, you would still have to wait for the player to mechanically wind its way to the correct spot. Depending on the length of the song, a 30 second wait just to get to the next song would not be out of the ordinary. Think about that the next time you click the wheel on your iPod.

I’m going to look through an issue of Playboy from the 1950s next as I imagine things were even more different back then.