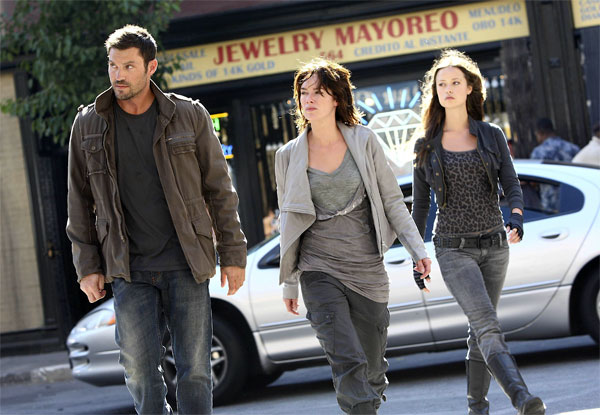 In a previous post, I implored fans to keep watching Terminator: The Sarah Connor Chronicles. The Fox show was put in a difficult position by the network in a series of stupid moves. First, there was a two month hiatus where Fox allowed the show to be forgotten by finicky viewers to begin with. Also, Fox moved the show to Friday nights, usually a death sentence for TV shows. My fears have been realized as the show’s ratings have dropped considerably since returning from the break.

The outlook for a third season looks bleak but I would ask the show and its viewers to just hold on for a few more weeks. I believe Fox executives would be stupid not to grant the show a third season, even if it were just a limited run of shows to begin next fall. Why? In just over one month, there will be a huge marketing campaign unleashed on the public for a movie called Terminator Salvation. It marks the fourth motion picture in the Terminator film franchise. The role of John Connor is being played by a guy named Christian Bale. You might have seen him last summer in a small independent movie called The Dark Knight.

My point is that the public will be bombarded with images, media, trailers, interviews, comic books, and toys, all having to do with the movie and more importantly the Terminator mythos. That is literally millions of dollars of associated advertising for the show. What show in recent memory gets such a lucky windfall?

I have no doubt that Salvation will be watched by millions of people. It will be a popular film. My hope is that the wide exposure of the film will remind people of the great Terminator mythos and get them looking for more entertainment about that universe. If the show can pick up just a fraction of the people that see the movie then that would be fantastic.

If I were a Fox network exec, I’d already have my prepped my strategy for Sarah Connor. By the time Salvation is out in the theatres, the second season of the show will be already over. I’d re-run the pilot of the show after Salvation is out one week. I’d specifically buy ad time to get commercials for the show to run after Salvation commercials. I’d buy ads in print and other media for the season one Blu-ray release of the show, all coinciding with the release of Salvation. I’d also get the stars of the show in on the premiere of the movie. All I’m asking is one group photo of the cast with Bale.

I’m telling you, not asking you, there are ways to capitalize on a this very rare and special opportunity. Of course, I’m just a regular dude and not a smart TV network executive, so I don’t know what Fox has planned. If I were a betting man though, I’d wager they won’t do a damn thing to save Sarah Connor.

Is this the end for the Connors? I guess we’ll find out in a few short weeks.