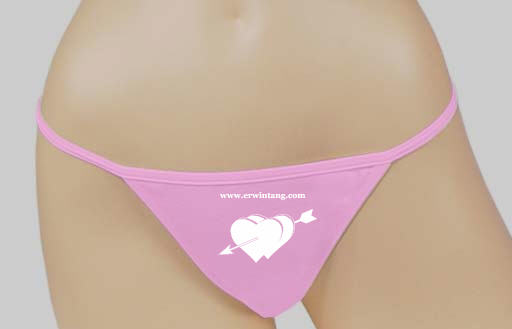 I’m not sure if everyone remembers but about three years ago, I ordered up about 20 custom made t-shirts with my web site address on them. When I gave them away for free, I suggested the possibility of next time ordering women’s panties/thongs with my web site address on the front. Though unfortunately the comments have been deleted since then, I got a very tepid response from my female blog readers at the time which led me to shelve the idea.

Last Thursday, when my co-workers and I were sitting in the pub in post-layoff shock, I was updating my blog to let all of you know I had survived the massive layoffs. A few of my co-workers didn’t know I had a blog. The talk turned to how I promote my web site and I mentioned the t-shirts. I also mentioned the less than enthusiastic response to my underwear idea. Two of my male co-workers immediately let me know they were pretty sure their significant others wouldn’t really mind wearing such things. Having met both of their partners and finding them to be very upstanding women, I was delighted to hear this.

Over the weekend, both of my co-workers confirmed that yes, their lady partners would be willing to wear erwintang.com underwear. In fact, one of them said that if I ordered items of a high enough quality, my underwear might even make it into her “rotation”. Well, what better response could I have hoped to get?

Now if money weren’t completely tied up in buying and furnishing my new apartment, I’m pretty sure I’d be ordering a dozen thongs with my web site address on it. In fact, just for fun, I actually have a quote for such an order. As it stands, I’ll have to probably continue to shelve this idea despite the new positive response. For all you ladies who frowned upon this idea earlier, have you changed your mind?