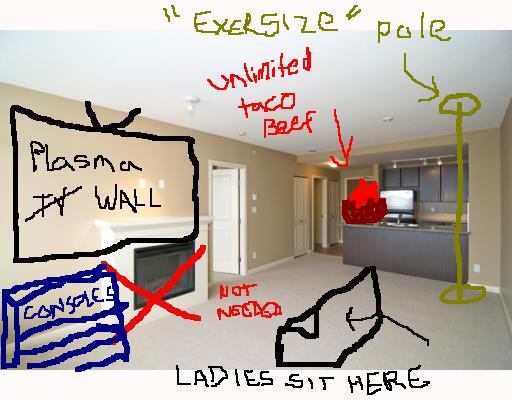 My loyal readers, what you see above is a picture that my good friend Bryan sent me from Australia. He is suggesting how I might want to decorate my apartment when the time comes. Thank you Bryan for the ideas!

When you look at what’s he done, Bryan is not far off from what I actually had in mind. I was indeed thinking of putting my Xbox 360 to the left of the fireplace. Above the fireplace was where I would put some sorta high definition widescreen display. The orientation of the couch is the exact same orientation I would put a couch in. I also really have no need for the fireplace. Between you and me, I kinda wish it wasn’t there.

If I were to make “unlimited taco beef”, that’s also where I would place the mythical bowl on the counter top. If you were wondering, the “unlimited taco beef” refers to a gathering I once promised to a bunch of dudes, Bryan and Adam among them. When I was renting an apartment on campus in my last year of grad school, I had this idea where I’d make about 10+ lbs of taco beef with the accompanying fixings and have “unlimited taco beef” night at my place with the boys. That never happened for reasons I won’t get into here but the idea always seemed attractive to all of us.

Last but certainly not least the “exersize” pole is pretty much self-explanatory. No apartment is complete without a brass pole made for dancing around. It’s a conversation starter for sure. Also, it reinforces the ceiling from a structural point of view.

Oh, by the way, the seller signed the contract which means this thing is getting pretty damn serious. I have perhaps one, maybe two opportunities left to flee to Mexico and change my identity.