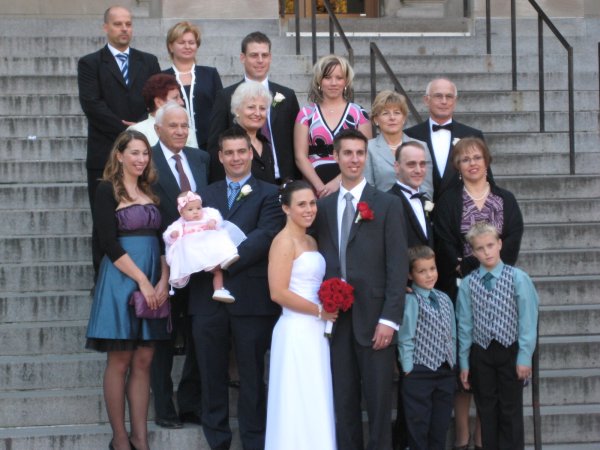 I spent last long weekend in Ottawa for the wedding of Adam and Kristina, two friends whom I met while I was living in SJC. After doing and still doing so much overtime at work, it was slightly surreal to be suddenly whisked away to another sitting for about four days.

My trip to Ottawa certainly started out pleasant as I met one of the wedding guests at the airport in Vancouver. Marcia was in town for business and was flying back to Ottawa on a flight just 15 minutes ahead of me. We agreed to meet up on the other end and cab together into town.

After a nice flight to the nation’s capital, Marcia and I grabbed our bags and took a cab into downtown Ottawa. I got dropped off at the Sheraton, while Marcia continued onto her home in Sandy Hill. I’d see her and the rest of her family at the church the next day.

After checking in and unpacking, I grabbed a quick dinner before retiring early for the evening. I was extremely tired considering I’d be doing so much OT and I got about four hours of sleep before flying. Even though I was sleeping in a strange bed, I had a most awesome night of sleep. I got up at noon and only because I had a wedding to go. Had there been no where to go, I’m pretty sure I would have slept until 2pm.

Given that I had to be at the church well before the 3pm start, I had little time to explore the city. While getting some lunch, I managed to explore a two-block radius around my hotel, where I noticed I was just a quick jaunt to Parliament. There wasn’t much time to look around so I headed back to my hotel. After suiting up, it time for the quick cab ride to the church.

Arriving at the church, I was seated with some of Adam’s friends from Toronto. I also managed to sit next to Jamil, another former SJC resident who also played ball hockey in the much revered SJC ball hockey sessions. It was great to catch up with him while we were waiting for the ceremony to start. Minutes before the start, Adam the groom arrived up front flanked by another ex-SJCer, Tyson who was the best man. I hadn’t seen Tyson since we were in Vegas last December and certainly not since his long journey on motorcycle across Africa.

As the ceremony started, I finally saw Kristina, as she marched down the aisle in her simple but elegant wedding gown. She was probably the third or fourth person I met when I was at SJC and six years later here I was at her wedding. At this point, the lady next to me, whom I believe was Adam’s cousin started sniffling a bit.

As Catholic wedding ceremonies go, it was pretty standard stuff, though I found it weird that at one point I had to wrestle Adam in front of so many people. I also noted that Adam and Kristina did not slip each other some tongue when they kissed at the end. It was an appropriate and classy kiss.

When it was over, everyone streamed out of the church to congratulate the new bride and groom. I got to talk to all the ex-SJCers at the wedding including Adam, Tyson, Jamil, Marcia, and Nic. Pleasant conversation all around.

Soon it was time to head off as Adam and Kristina gave us just the right amount time in between the end of the ceremony and the start of the wedding reception. I headed back to the hotel to freshen up and then met up with Jamil for the cab ride over to the reception, which was held at the Royal Ottawa Golf Club. For starters, it was hors-d’oeuvres and open bar! A few gin and tonics for me helped me get into a festive mood before sitting down for dinner.

It was at my table that I realized there were only three non-white people in the entire wedding and all of us were at my table. Other myself, Jamil, and a nice lady, it was all white folk. It didn’t really matter but I knew the dance portion of the wedding wasn’t going to be pretty.

Anyways, props go out to Adam and Kristina for keeping a brisk pace for the evening. Not once did I think I was waiting for food or feeling hungry. As soon as we sat down, dinner service began in earnest. I took pictures of all the courses and will post those soon. I was especially pleased with the prime rib served as I do enjoy them prime ribs.

The speeches during the evening were pleasantly short, touching, funny, and entertaining. At no time did anyone embarass themselves at all. Also, I did not feel like pulling out the “true love is hard to find” speech. I admit though, early at the church, I did want to say to Kristina’s father “it takes a man to give away an angel.”

During evening, I found out I was the lucky winner of the centerpiece at my table. The 1/2 scale sculpture of a goose made from pure whipped butter was mine to keep. Actually, it was a glass vase of roses but Marcia convinced me it would be hard to bring that back on the plane. I agreed so I gave it to her.

After the eating, it was time for more drinking and for the dancing to start. I didn’t see much of Adam and Kristina’s first dance but I’ve seen them eat at McDonald’s together, so I assume it was pretty much the same thing. I also managed to “grade seven slow dance” with Kristina which was awesome.

Anyways, I managed to do some more stuff while in Ottawa but that will have to wait for another post. A & K, thanks for inviting me to your wedding!