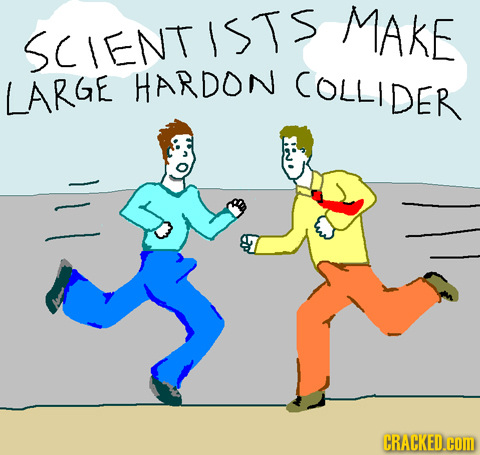 Today was a big day for geeks and scientists alike as they turned on the CERN Large Hadron Collider for the very first time. Even non-sciencey people might have read about this since there have been some fears the ambitious undertaking could lead to the destruction of the planet (via black holes).

For those who don’t know what goes on with the LHC near the Swiss-French border, it’s quite simple. Scientists are attempting to accelerate particles at each other near the speed of light and smashing them together. The resulting collision, they hope, will shed some light on the mysteries of quantum physics that have eluded physicists for some time.

The facility is interesting for many different reasons. First, there is the whole “it can destroy the world” controversy. I have read that technically the experiment could produce black holes, which by their nature coud suck all matter into them, including our planet. I have also read though, that such black holes would be too small and live too short to do any damage.

Second, such a large scale and ambitious experiment has had many parallels in fiction already. The most famous of which comes from the video game universe of Half-Life. In that universe, a large scale experiment relating to quantum physics goes horribly wrong, opening a portal to another world. Aliens from that world enter our world through the portal, effectively starting the end of civilization. The hero of the series, is none other than an oddly silent physicist, who was working on the experiment.

Third, I actually knowing a scientist working at the LHC who is there right now. Frank, who I met while living at SJC, is doing a PhD in physics and was lucky enough to witness the “flip of the switch” today. We always joked how Frank was the closest thing we had to a real-life Dr. Gordon Freeman but little did we know he’d take it a lot farther than we’d ever guess.

Last but not least, there’s something you should consider. You may believe everything is cool since they turned it on and we’re all still here. Keep this in mind, today was just the initial start up test. They only got the particles moving in one direction or the other today but not opposite directions at the same time. There were no full speed collisions today. In fact, they don’t plan on having big smash ups occurring until near Christmas. How do I know this? Frank told a whole bunch of people this and he should know. So it’ll be a few months yet before you can let go of your crowbar.

One thought on “THE LARGE HADRON COLLIDER”