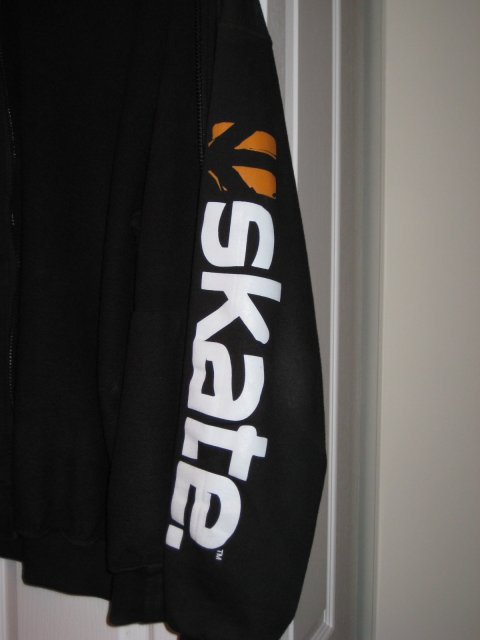 So the other day I was upstairs at work in the reception area. I was on my way back down to my floor when I passed by the EA store. I noticed there were a line of hoodies out on display. Now I hadn’t seen the hoodies out for a while but from where I was standing they looked like the same old ones we had last year for skate. and Need For Speed. Nonetheless, I went over to check them out.

The first thing I did was to grab one of the sleeves. I immediately saw the skate logo and the familiar font but I then also saw a big ass “2” after the skate. On the back near the bum was the logo for skate it. So these were the new hoodies for the sequel and the spin-off game for the Wii. This was the new hotness, as it were.

I went back downstairs but I was now thinking, can I still wear my old skate. hoodie (picture above)? Yes, of course I could but now it’s not the latest and greatest. On the same day, one of the other software engineer I work with bought the new hoodie immediately, while wearing his original one! He has two now, both the same colour.

For a guy that didn’t own a hoodie a year ago, I probably don’t need another one (I also have a Black Box one) but I’ll be keeping an eye out on what the cool kids are wearing.