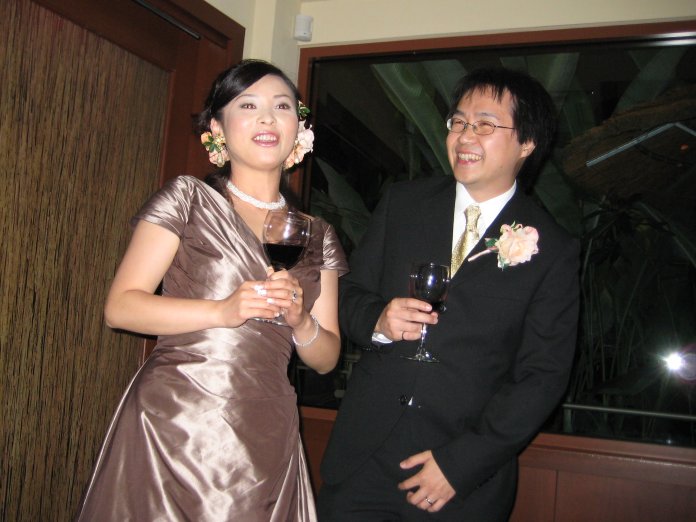 In a previous post, I detailed what it was like for my friend Ron to get married in a church in Honolulu, Hawaii. In this post, I chronicle what went down at the wedding reception.

After the ceremony was over, John and I headed back to the touristy area of Waikiki. We then had lunch at an excellent Italian restaurant. We had time to spend since the reception didn’t start until 8pm. I forget exactly what we did for the rest of the afternoon but John had to depart early for the restaurant since he had best man duties to attend to.

The venue for the restaurant was Roy’s Restaurant at their Waikiki Beach location, just a block away from the sand and surf. Not only was it just a block away from the beach, it was nearly next door to our hotel. As such, I was still sitting on my hotel bed in my underwear just ten minutes before the 8pm start time. After a short stroll of less than 100 paces, I arrived at Roy’s.

After a short delay in setting up our private room, we were led to our dining area. The reception party was only about 20 people so we needed just three large tables. I was graciously seat at the table with the married couple Ron and Miho, the best man, the maid of honour, two of the Miho’s friends, and Miho’s cousin. The other tables were split along family lines.

I would soon discover the service was phenomenal at Roy’s. We have several waiters dedicated to just our party for the entire evening. Not only were they dedicated, they were attentive, professional, and nothing short of impressive at taking care of us.

Unlike many wedding receptions, this one started off right on time. There was very little delay in waiting for the food. In short order, the dim sum style appetizer plates began arriving. In no particular order, they were: lobster ravioli, ahi tuna poke, crab cakes, beef shortribs, and sea scallops. The appetizers were absolutely incredible. Each plate was so good. You can view pictures of the plates here. I admit that is a public Facebook gallery but I can’t help it, their uploading and interface for pictures is top notch.

Anyways, it was during the appetizers that a somewhat humourous event occurred. Ron was trying to pass the plate of shortribs to his new wife when I don’t know what the hell happened but the end result was that he tipped over a glass of red wine with the plate. Red wine spilled all over the table cloth and more importantly, over Miho’s dress! She jumped up in horror and her friends came over to lessen the damage. Somewhat fortunately, she had something in her lap that took a bit of the wine. The waiters came outta nowhere with towels and napkins to absorb the wine from both her dress and the table. Miho had a choice word for Ron, while I could only say, “this is an excellent start to the marriage.” Ron himself just sat there stunned.

Luckily, the dress survived without too much staining and the waiters were amazing with their repair of the tablecloth, you couldn’t even notice anything had spilled. John, the best man, then got up to say some nice words about Ron. It was a good speech that he wrote in a short amount of time. Sadly, the speech did not contain the phrase “true love is hard to find, some times you think you’ve found true love but then you catch the early flight home…”

Anyways, the salad came soon after. It was the best salad I’ve ever had. It was this fusion of Hawaiin cuisine with traditional caesar salad. I’m not sure if I can describe it properly. Just look at it! Then came the main courses. It was a real struggle to choose mine. I chose the scallops. They were tasty but in retrospect, I shoulda had either the rack of lamb or the filet mignon. You can see the menu here. After the mains, Miho and Ron got up to address the whole reception. They thanked us for coming all this way to celebrate their special occasion. Miho gave everyone a set of lovely gifts. They were all nicely wrapped and consisted of peach tea, a tin of delicious cookies from Japan, and a Japanese bowl and chopstick set.

Then came the dessert which combined two of my favourite things: chocolate and ice cream. By now though, you must know I was extremely full. Having had so many appetizers and the main course itself, I was having trouble mustering the courage to start my dessert. The chocolate souffle begged to be eaten though, so I managed to devour all the ice cream. Then came the chocolate cake part. I busted it open to reveal this “chocolate lava” which was this warm chocolate sauce.

As if this wasn’t bad enough, then Ron and Miho cut the wedding cake, which served up to 40 people, double the number we had. As one of the waiters placed a piece in front of me, I had no idea how I was gonna eat it. I was busting at the seams. It was their wedding cake though, so there was no way I wasn’t gonna at least try it. I tasted a bit of the sponge cake and some of the whipped cream before nearly collapsing at the table.

By this time, it was getting late and people were getting lethargic from all the food. We packed up our gifts, said our goodbyes to everyone, and left. On our way out, we thanked the staff for a wonderful evening. After arriving back at our hotel, I briefly thought about hitting a bar with John but both of us were so full, all we could do was get changed into our jammies and watch TV. John is a complete lightweight when it comes to staying up late so he fell asleep almost immediately. I managed to become fascinated by a few A&E shows before I decided to hit the hay myself.

And that’s your Hawaiian wedding reception.

2 thoughts on “A HAWAIIAN WEDDING RECEPTION”