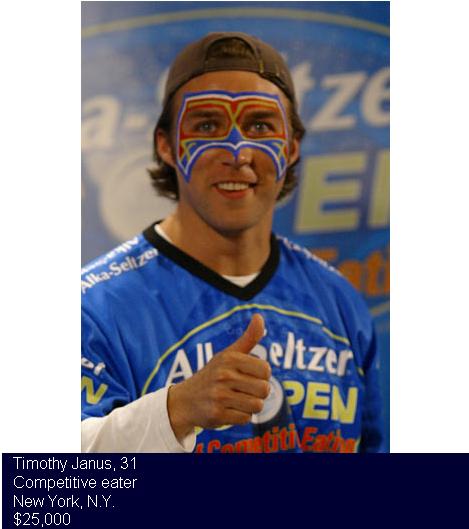 Parade Magazine has released their annual US salary survey. Yes, it’s in US dollars and based on US markets but it’s still quite interesting for us Canadian folks.

There are a lot of fascinating jobs and salaries listed. I picked the guy above for my post not because of how much he makes but for the fact that you can actually have a job being a competitive eater. Sure, he probably doesn’t own a brownstone on the Lower East Side, but think of it this way, he gets paid $25K a year to eat, something we pay to do.

I don’t feel superior to the people who get paid less than I do, nor do I resent the people who make more than I do. Actually, there was this one guy in the list that made over $200K as a car sales manager. When I read that, there might have been a molecule of resentment that developed in me. That’s a pretty big salary for someone who sells cars. Of course, I know nothing of what he does, so this is me pretty much making a snap judgment. Terrible me!