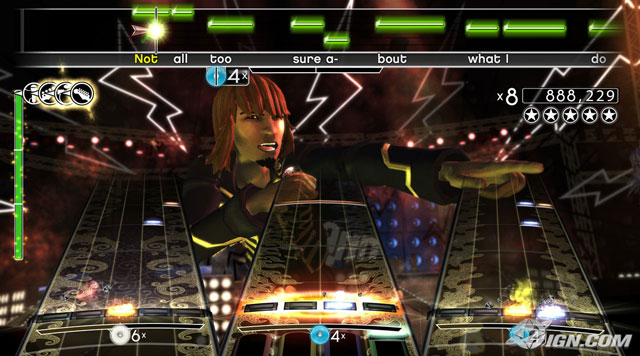 On Saturday night, I brought Rock Band over to St. John’s College, marking the first time I played the game with all the instruments at once. My gracious hosts were Shawn and Kafui. We were setup in the dining hall where we had use of an LCD projector and a portable screen. The projector was apparently very new and surprisingly did 1080p! The limiting factor was the screen itself, it was squared shaped and only about 4 feet across. If we had a white wall available, the image would have been massive. Still, it was bigger than any LCD screen we could have found. The audio was hooked up to a decent portable stereo. Though we tried hard, we could not find a second compatible guitar for the evening, meaning no bass guitar this time around.

Special guest Frank was luckily in town and he made an appearance to my delight. Initially, there weren’t that many people playing. It was myself, Frank, Shawn, and Kafui doing the first couple of songs, just getting used to the instruments and game mechanics like going into Overdrive.

After the first couple of songs, people would randomly wander into the dining hall, either drawn there by the sound of music or seeing the game on the screen from afar. Though a few people had actually played Rock Band before, most had not, and were not gamers in general. Despite this though, it was interesting to see the intrigue on people’s faces when they saw the setup. The combination of the 3D animations of the musicians and the crowd, the multiple tracks with coloured squares flying down the screen, and the beats booming from the stereo made a lot of people wonder “what the hell is all this?” It’s here that I was able to see the great strengths of Rock Band. It truly does a great job of being accessible for any type of person, from the seasoner gamer to the first-time gamer.

We had a lot of people try the game for the first time. After just a minute or less of explanation, they were beating on the drums, riffing chords, and hitting the high notes during the chorus. There were a few people who had no idea we were playing that night but after seeing us set up, they didn’t leave the dining hall until the final song was played. People also started falling into their preferred roles after trying out the instruments. One dude was our star vocalist, willing to sing pretty much anything. He really got into it, virtually channeling the Beastie Boys during “Sabotage“. They say any good band requires a good drummer and we had ours fortunately. This crazy talented journalism student could do the drums on “hard” which was a feat I had yet to see and we have Rock Band set up at EA Black Box. His coordination and sense of timing was incredible.

One other thing I discovered is that certain songs draw people in more than others. Crowd-friendly and high energy tracks like “Dani California” from the Red Hot Chili Peppers were just awesome to play for everyone. When people were playing that track, it kinda did feel like they were rocking out on stage. When people see that much fun being had, they want to give it a try.

We didn’t pack things up until around 2am, having played for about 4 hours. I thought people really enjoyed themselves but Shawn later told me that some residents were still talking about Rock Band during dinner on Sunday. Kafui actually forwarded me an e-mail where one person already had a list of tracks that they want downloaded for “next weekend”.

It’s been written a thousand times before but it’s true, Rock Band is really a good time with a bunch of people.

One thought on “ROCK BAND MULTI”