I’ve had this pet peeve for a while but I’ve only now expressed it in blog form. It’s got to do with lineups and people. This pet peeve can happen anytime you have a service counter, people working that counter, and people lining up to receive a service. This most commonly happens in fast-food lineups but can also occur in other situations, like customer service lineups.

There are mainly two ways the lineup can form: the wrong way and the right way. I will discuss the wrong way first. Refer to the diagram below. 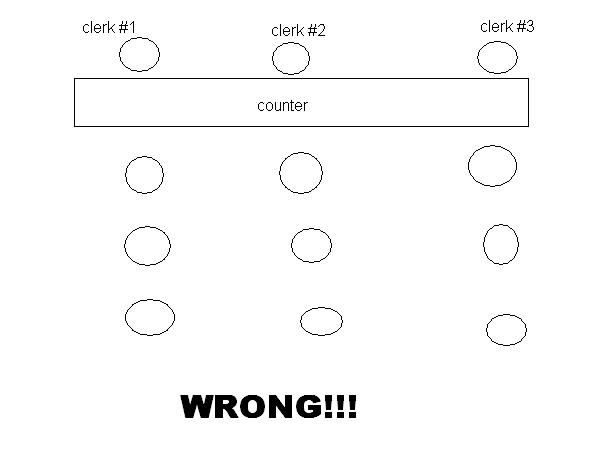 So what do you see here? There are three people working the counter and three separate lineups, with each lineup waiting for an individual clerk. Looks fine right? Wrong! This situation does not take into account the temporal aspect of when a person enters the lineup and does not guarantee fairness in wait times. Consider a example for further discussion. Let’s say I enter the lineup on the left-hand side, in the number three position. The center lineup already has three people in it. A full two minutes later, a person enters the lineup on the right hand side, also sliding into the number three position.

Since I lined up two minutes before righty, I should in all fairness get served first. This arrangement, however, does not guarantee that. Imagine that clerk #1 is new or that clerk #3 is super efficient. Or, imagine that the dude at the front of my line has no idea what he wants and is asking the clerk all sorts of questions. My line starts to suffer in terms of people served per time unit. While I’m being delayed, righty, through sheer luck, gets served before I do, possibly significantly before.

I know this happens often because I’ve had this happen to me many, many times. Sure, I’ve also benefited from the improper lineup configuration but I shouldn’t have had that good fortune. Also, you’d be naive not to think people in the slow lineup don’t notice how slow their line is and how much faster the other ones are. People do notice and sometimes even try to switch lines.

Ideally, the best situation is in which every person is served in the order in which they arrived, relative in time to everyone else waiting. In computer hardware/software terms, that’s a FIFO lineup, first in first out. How do you enforce such a priority scheme? Look at the right way below. 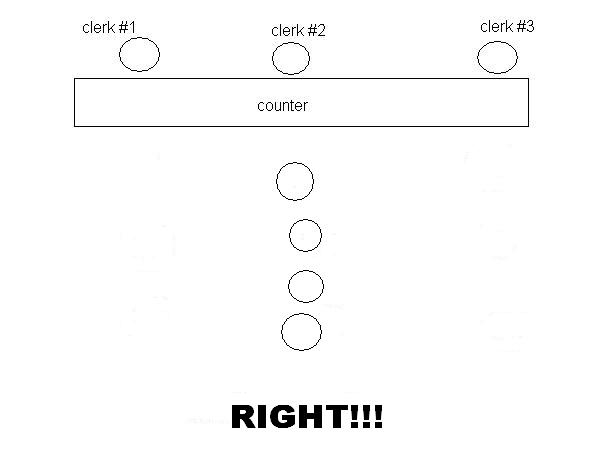 The solution is quite simple. There is only one lineup, not three separate ones. The person at the head of the line always gets the next available clerk. This configuration ensures that everyone is served in the order at which time they entered the lineup. It guarantees that no one who gets in the lineup before you will be served before you. Of course, this won’t guarantee you’ll get your food (or whatever) before the guy behind you. If you order some crazy special Big Mac with all sorts of custom mods, then don’t be crying if the dude behind you gets his medium fries first and takes off.

If you think I’m the only one worrying about this, consider these two common lineup “helpers”. First, consider lineups where people are controlled and herded with velvet ropes (or similar items). They do this because they don’t want people forming several different lineups. It enforces a single line, in the shape that they want the line in. It also enforces fairness. First in the line becomes first to exit the line.

Also consider the “take a number” helper. People take a number and wait to be served when their number is called. The numbers go up to a certain point and then roll back around. The numbers are also called in an increasing manner. Again, this is to ensure temporal fairness. You are guaranteed to receive service before the guy that got there after you.

Lastly, let me tell you about a time I experience a “wrong” lineup. It was at the McDonald’s at Waterfront Centre. There were two clerks, and two lineups, each waiting for a clerk. I was dismayed to see this so I just chose the line that looked like the best one to be in. While I was waiting, I tried to actually consolidate the lines into a single line. No one listened to me and I got some weird looks. This is why our society is crumbling.

I leave you with a request. For the good of civilization, if you’re ever the first person to form a line, stand an equidistant amount from each clerk that’s working. Do that even if it means there is no clerk directly in front of you. My experience is that people naturally understand they need to get behind you, so you’ll force fairness on the rest of the lineup behind you. If someone lines up parallel to you, get their attention, give them a look, and motion to the place behind you.

Come on people! We can do it!