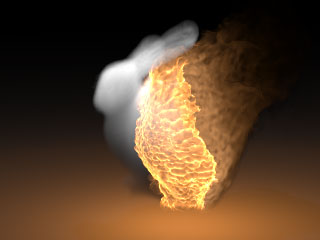 UPDATE: With hits coming from Sunnyvale, Concord, and Los Angeles, I’m pretty sure either Dr. Fedkiw himself or at least people who know him have read this.

With a world of over six billion people there are some amazing individuals who exist on this planet. I would like to point out one of those individuals. Dr. Ron Fedkiw is an Associate Professor of Computer Science at Stanford University in California. He has a PhD in applied mathematics from UCLA. So just let’s examine that right there. Dr. Fedkiw has a doctorate from a good school in an area that’s pretty rigourous and challenging. So we already know he’s a pretty smart guy. He also teaches and does his research at Stanford, a school that’s well-respected. Not only that, he’s an Associate Professor, not an Assistant, meaning he’s done enough quality research and published enough papers to merit the increased status. I’m almost certain he’s tenured as well.

So is that all there is to Dr. Fedkiw? Nope. He’s considered an expert in the field of computer graphics specifically relating to the modeling of natural phenomena such water, smoke, and other complex physical interactions. He is a consultant to Industrial Light and Magic, the legendary special effects house that George Lucas started. His movie credits include the last Terminator movie and Episode III: Revenge of the Sith. Feel free to look at all the video clips on his departmental web site to get an understanding of his work. This fireball is a favourite of mine. Keep in mind that animation is not done by hand, it’s all calculated using mathematics. His list of published papers is lengthy and any academic would love to be that productive.

So smart guy, expert in his field, ILM collaborator, is that it? Nope. Days from now Dr. Fedkiw will be awarded a Scientific and Technical Academy Award for his work in feature films. Yes, that’s right, the man is going to get an Oscar.

So we’re done right? No man can be that smart, publish that many papers, win an Oscar and still got stuff to be proud of right? Right? Wrong again! Dr. Fedkiw was a competitive weightlifter in his earlier days. By his own admission, he states he bench pressed a personal best of 555 lbs. Holy! Just look at what he used to look like in his younger days. Does that look like a professor of computer science?

Surely one man could have nothing else to be thankful for right? Smart, respected, Oscar winner, there cannot be anything else we could be impressed by, correct? Wrong again! Dr. Fedkiw married an NFL cheerleader. He is a computer scientist who married an NFL cheerleader. Read that sentence again. How many times has that been fact in the history of the world? Together with his wife, Dr. Fedkiw have two adorable daughters. So after a day of teaching students and making pretty pictures for geeks, he goes home to a loving family.

So that’s it for real. I know nothing more about that man. He probably has some more impressive credentials but he just hasn’t made them public yet.

I know you can define success in life in many different ways but gosh darn it, Dr. Fedkiw has done a lot of things right.

Geez, I hope he doesn’t find this post through Google or something.