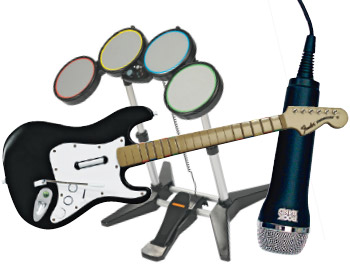 Around lunch time today I randomly surfed to the Future Shop web site. There on the front page was a link to Rock Band the Special Edition. That was strange because they usually don’t put a link like that to a product that has been continually sold out. I clicked on the link.

It was the Rock Band product page. There were 130 sets available for sale. Wow. I paused briefly since I wasn’t sure if buying it through Future Shop was the best idea. I refreshed the web page. There was now 120 left. These things were going fast. I thought about it some more. Hmm… Refresh. Now there were 91 left.

So it was right then and there that I ponied up for my own Rock Band. After shipping and tax, it came to $214. So why did I hesitate at first? Let me explain.

EA, my employer, is the distributor for the game, which means we sometimes get the game in our EA store at the studio. Actually, that’s only happened once and they had to draw names since the demand was so high. In any case, it was sold for $80 less than retail and you take it home that day and of course without shipping costs. Now the store hasn’t gotten any shipments of the 360 version since then and that was a good two months ago. Then again, they could get some on Monday and knowing my luck, that’ll probably happen.

Well, it’s too late anyways, so I’ll just have to wait for Canada Post to deliver my copy. According to Future Shop, the earliest I’ll get it is the 14th of this month. I can’t wait to try out all the instruments though I admit, I won’t be doing too much singing.

I’m also looking forward to a Rock Band party with potentially even girls there. As my place is too small for a proper shindig, I’ll be looking for other venues. Dr. Dave, I’m looking in your direction…

Some of the tracks I’m looking forward to playing:

The Killers – When We Were Young

Radiohead – Creep (always wanted to play the drums on this)

3 thoughts on “NOW PART OF A ROCK BAND”