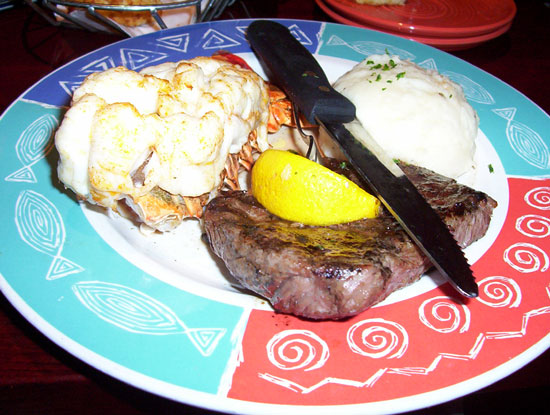 On my trip to New York, I got to fulfill a wish of mine, which was to have a meal at a Red Lobster restaurant. Now, that probably seems silly to some of you. Living in Vancouver, with the Pacific Ocean right next to me, I have a plethora of wonderful local seafood restaurants to choose from. Why I would want to partake in a restaurant chain when I can have awesome seafood locally might be odd.

Well, the thing is, I really love my seafood. I love salmon, mussels, clams, lobster, crab (only if the meat has been taken out of the shell for me), and oysters. That there is a large chain of restaurants catering to seafood gets my interest. Unfortunately, there are no Red Lobsters in Vancouver.

Ten years ago, I was on a family vacation in Honolulu. We were wandering around one evening trying to decide what to have a for dinner. I saw a Red Lobster and I convinced my Mom to let us go there for dinner. As we were walking to the RL in question, my Mom saw a Chinese restaurant at the very last second and immediately diverted us there. I don’t think my Mom can go three days without eating Chinese food. Anyways, I wanted to go to the RL the next evening but my Mom decided we were going to the same stupid Chinese restaurant again. It wasn’t even that good.

For ten years, that was the closest I came to going to a RL. Then last week, as were walking through Times Square, I saw a RL just off Broadway. I sheepishly asked Joel if we could go there for dinner. He kinda looked at me funny but he said it was my vacation.

So we went to RL for dinner that evening. The RL in Times Square is quite nice. It’s got three floors and you can take a glass elevator to the upper areas. The menu itself is quite extensive. I was impressed with the number of choices. They also have a seasonal menu which highlights what specials they have at the moment.

In the end, I went with the classic surf and turf, a medium rare sirloin steak with a rock lobster tail and mashed potatoes. For starters, I had a most pleasant green salad with the best honey mustard dressing I’ve ever had. We also had a basket of Cheddar Bay Biscuits. Joel was kind enough to point out each of the biscuits contained nine grams of fat. Knowing this, I had half of one. It was ok.

The main course itself was delicious. The steak was better than the lobster though. The sirloin was quite tender and marinated to the right amount. The lobster was not as flavourful as I had wanted. It was perhaps a lack of a sauce or even some butter that caused it to lose a few points with me.

Some of you might remember that the “best SJC formal dinner ever” also featured surf and turf. I’d say the RL steak was on par with Clarence’s but his lobster was much better than RL’s.

Overall, I was quite pleased with my meal at RL. I might garner some shame for this but if they had RL here in Vancouver, I might go a few times a year.

Thanks must go out to Joel for letting me indulge in my RL experience.

2 thoughts on “THE RED LOBSTER EXPERIENCE”