Today, in Washington D.C., Borat held a press conference right outside the embassy of Kazakhstan. That’s pretty ballsy considering the government of Kazakhstan has been on Cohen’s case for months for distorting their image to world. Cohen is on a whirlwind tour of the US to promote his new Borat film.

There are two videos from the press conference. The first part you can view above. The second part can been seen here. If the audio is too low for you, there is a transcript of the event. It makes for a good read. Here’s just a sample of what he had to say:

“Jagshemash, my name Borat Sagdiyev. I would like to comment on recent advertisments on television and in media about my nation of Kazakhstan, saying that women are treated equally, and that all religions are tolerated – these are disgusting fabrications. These claims are part of a propoganda campaign against our country by evil nitwits Uzbekistan – who as we all know are a very nosey people, with a bone in the middle of their brain.”

Though I don’t hate working in a large, downtown-style office building, I’m now of the opinion it wouldn’t be so bad if I never worked in one ever again.

I currently work in a large, 20 story multi-tenant office building in downtown Vancouver. I’ve been there less than two months. Waiting for elevators is the suckiest part. If you get to the lobby around 9am, there’s tons of people waiting to get to the upper floors. There’s even lineups so that you won’t necessarily get in the first elevator that comes. I can just imagine how bad it is when the rainy season starts and everyone is jammed in there with their soggy coats and umbrellas.

Then sometimes you get these weird looks in the elevator from the rest of the tenants in my building. The other companies that use this building are accounting firms, lawyers, you know, traditional business types. In a typical elevator car, you’ll see men in business suits and ties, women in pant suits and dresses, and then guys in ripped jeans and t-shirts that shows you how to do a combo in Street Fighter 2. Guess who works at EA?

I wonder if the “suits” ever talk about us?

The other extreme is the large campus that covers several acres, exactly like the EAC facility in Burnaby. There’s lots of space where things aren’t cramped because that’s how office buildings are. There’s also room for expansion if needed. Because there’s no sharing of space with other tenants, there is a much more cohesive feel to the environment. No running into Mr. Joe Accountant in the elevator.

This news report shows us why you don’t use a dog leash that’s 4.6m long.

I’ve come to appreciate my friendship with Ron, a former co-worker of mine. At first, I thought he was just an angry Chinese guy but I had it all wrong. After countless philosophical discussions about many, many different subjects, I found that his observations about life and society are wise ones.

Let me share with you just two of his irrefutable truths.

The one first came about after we both had sat down for some particularly good Wakamidori Sencha green tea. With the leaves still swirling in our cups and the aroma of the Far East permeating in the air, talk quickly turned to subject of choice. More specifically, we began to wonder why women, in great numbers, appear to make such poor choices when it comes to men. As I poured Ron another cup of tea, it was no clear no amount of math would help us solve this problem. Soon after, Ron supplied not an answer, but at least a truth from which we could work from. I’ll never forget when he said:

“At any given moment, somewhere in the world, a hot girl is being serviced by a complete moron.”

His words rang truer than any peer reviewed proof in the Journal of Applied Mathematics. Yes, it was a hard, cold reality but isn’t accepting the truth the first step towards… something or another?

The second irrefutable truth came about when we were in China this summer. After an ardous hike we had just reached the summit of Huang Shan or Yellow Mountain in the province of An Hui. As we rested, the vantage point afforded us a spectacular view of the XinAn River. Naturally, the conversation turned to the subject of zombies. Also, if you’re going to be discussing zombies, what logically follows is why guys get stuck in the friend zone with women. What’s worse than getting your penis getting chewed off by a zombie? Well, it’s when your lady friend doesn’t even know you have one. We then started to talk about what each of us would do in zombie movie situations, for example in Dawn of the Dead (2004).

Ron thought about it for a while and then he had this to say:

“Even if I was the last man on earth, Sarah Polley would proably say something like ‘Oh, we can’t re-populate the earth, sex would ruin our friendship. You’re such a good friend.'”

Could anyone dispute this? The simple answer is no. I know for a fact several women would say this to myself and many other guys too. That statement stood out for me as one of the highlights of our trip, possibly even rivaling our hijinx on Huaihai Road when we stumbled into Shanghai looking for square hamburgers.

Well, there you have it, just a few nuggets of wisdom from my friend Ron. Stay tuned for more!

I’d like to share with you one of my all-time favourite Dave Letterman segments. In this piece, Dave takes over a shift at the drive-through window at a Taco Bell. 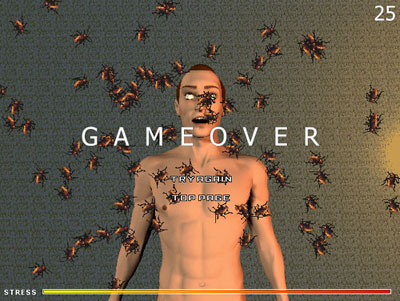 There are times when I have to give credit to people who design games. In the Flash game see you above, you control a rolled up piece of newspaper or something. There’s also a naked guy who appears to be sleeping on a cockroach infested floor. Why, I don’t know. Anyways, when a cockroach touches his body, his stress levels goes up. Your job is to smack as many cockroaches as you can using your mouse before the guy freaks out.

It might seem weird but you know what? It is weird. 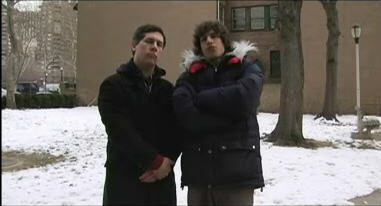 From just about the first minute that I accepted my job at EA during the summer, people started asking me what I’d be working on. Unfortunately, I had to give them that standard, video game industry answer of “I can’t tell you.” I understand the reasons behind keeping things secret but when you actually have to be all James Bond about it in front of your friends, you look silly.

Well, today EA finally announced in a press release the game I’m working on. It is simply called Skate or SKATE. I’ll leave it up to the marketing types. Anyways, it’s a new game. It’s not a yearly iteration of some sports title, nor is it a tie-in based on some movie or literary source. It’s all new ideas and it’ll be for the PS3 and Xbox 360.

Oh, I guess I should say it’s a skateboarding game too. So, I expect some of you right now to be shaking your heads, thinking it’s gonna be a tough climb going against Tony Hawk. There’s no doubt that the Tony Hawk games are the titles to beat when it comes to skateboarding. No one has even come close to beating them so far.

Time will only tell what happens when our game is compared to theirs. I will say one thing though. There are a lot of super smart people working on my team. Each one of them geniuses in their own right. There are also a lot of very creative and passionate people working on the game. EA has assembled some serious talent for this project.

I’m looking forward to what we come up with in the next few months.

Despite that the fact I love gadgets and that I have a relatively high-tech job, I seem to be one of last people to try out a new technology. One of those things is wifi. Until last week, I’d never owned a device that had wifi nor had I ever connected to a wifi network. My Palm T|X bought over Ebay arrived in the mail last week.

I quickly discovered that someone, probably one of my neighbours, has generously left his or her wireless network open for connection. It’s a pretty good signal and it how I was able to wirelessly surf the Internet on my Palm for the very first time. It kinda made me wonder if I’d be able to cancel my ISP account. Nah, that’s being cheap.

Anyways, I brought my PDA to work for the first time today. Let me tell you, downtown Vancouver is alive with wireless networks. Just walking the one block to work from the bus stop, I was able to detect half a dozen access points, some secured while some not.

On my afternoon break, I was able to confirm that Sinclair Centre indeed has a public wifi access point. The signal is pretty strong on the ground floor but you have to keep away from the food court. I was able to check my personal e-mail account and even send off a quick message. All of this just across from where I work. Yay!

When I was waiting for the bus to go home, there was a strong enough signal from who knows where that I could check my mail one last time before hopping on the bus.

I don’t know how you feel about it but this whole Betamax thing is pretty damn cool. What will they think of next?

Comedian and fellow Canadian Norm MacDonald has never pulled any punches when it comes to comedy and he demonstrated that during a recent appearance on The Daily Show. Norm commented on the Steve Irwin tragedy. I’m not sure what it means if you laugh at his comments but Jon Stewart does change the subject. Jon asks Norm if he knows anything about Canadian Foreign Affairs Minister Peter MacKay. You can certainly laugh at his response.