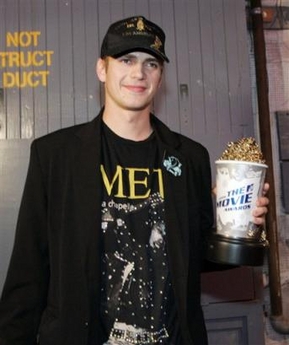 Without a doubt my favourite awards show to watch during the year are the MTV Movie Awards. The show is light-hearted, doesn’t take itself seriously, and always fun to watch. More entertainment than a chance for Hollywood to gratify itself, the list of stars that attend usually skews towards a younger set.

This years’s show was hosted by Jessica Alba who went through what seemed like a dozen costume changes throughout the show. Also in attendance were the likes of Owen Wilson, Steve Carrell, Will Ferrell, Keanu Reeves, Samuel L. Jackson, Borat, and Jim Carey among others.

As a sign of how laid back the awards are, the results are announced even before the show airs on TV. Taped over the weekend, the show will be shown on MTV and MuchMusic this Thursday.

There was only one category that I even cared for and when I read the winner for it, I was disappointed and a tad miffed. The Best Fight category is a unique one and always features some good nominees. This year’s list featured: King Kong vs. the planes from King Kong, some kung fu fight from Kung Fu Hustle, some gun battle with Bradgelina in Mr. and Mrs. Smith, and last but certainly not least, the lightsaber battle between Obi-Wan Kenobi and Anakin Skywalker at the climax of Revenge of the Sith.

Now voting was done online and from what I understand, there are no provisions in place to prevent ballot stuffing. As such, results can turn out like rolling a pair of device. So guess which movie won? Mr. and Mrs. Smith. That’s completely ridonkulous. It’s actually a crime in all honesty.

The fight between Obi-Wan and Anakin should have won by a long shot. That lightsaber battle makes all those other fights look like verbal arguments between senior citizens. The sequence remains the longest duel in cinematic history. First hinted at in the novelization of A New Hope in the late 1970s, Star Wars fans had been waiting for nearly three decades to see how the events transpired on a lava-filled planet. How long did they fight? How did they start fighting? What did the planet look like? How did Obi-Wan defeat Anakin? How did Anakin drag his charred body out of the lava? All these long-standing questions were answered in this single, dramatic sequence.

It was this very fight that led to the creation of one of, if not the most, iconic villains in cinema history, Darth Vader himself.

So, my friends, how is it that Mr. and Mrs. Smith won? The answer is not because the fight sequence was especially good but because it had Brad Pitt and Angelina Jolie in it and they just happen to be the hottest couple in Hollywood.

Now Star Wars fans are usually pretty good with the Internet and stuffing ballot boxes so I’m not sure what happened this time around. All I know is that they dropped the proverbial ball like it was a thermal detonator in Jabba’s palace. I voted for Sith twice myself, once at home and another time at work, thinking it would be enough. I was wrong.

Sith was also nominated for two other awards, Ewan McGregor for Best Hero and Hayden Christensen for Best Villain. Suprisingly, Christensen won his category even though McGregor had a way better performance in the movie and simply kicked ass while channeling the spirit of Alec Guiness.

I’m probably the most miffed guy out there about a light-hearted movie awards show. You can download the 2006 MTV Movie Awards show on Bittorrent starting June 8th.